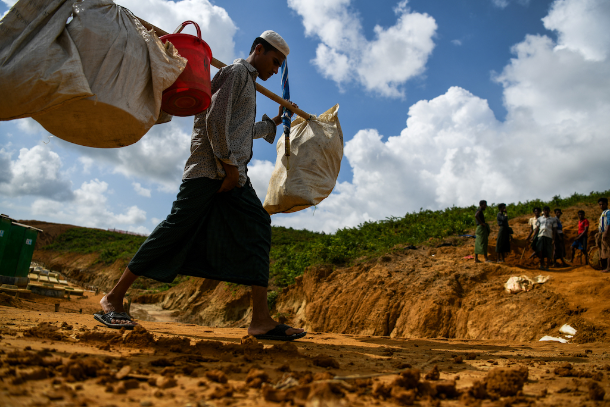 A Rohingya refugee carries a load through Kutupalong refugee camp in Ukhia, Bangladesh, on Aug. 8. Bangladesh and Myanmar signed a repatriation deal last November but little progress has been made. (Photo by Chandan Khanna/AFP)

He is meeting senior Myanmar officials and visiting conflict-torn Rakhine State on his four-day visit from Aug. 9-12.

Ali last week told the ASEAN Regional Forum in Singapore that he wanted to see for himself the progress of Myanmar's preparations for receiving Rohingya.

"The refugee problem is essentially political in nature, but it has its origin in Myanmar and its solution has to be found there," Ali told the meeting.

On Aug. 8, U.N. agencies UNDP and UNHCR called on Myanmar authorities to make tangible progress in improving conditions in northern Rakhine as two months have elapsed since they signed a memorandum of understanding (MoU) with Myanmar's government.

"The Myanmar government's willingness to take the lead in the implementation of this agreement is critical to creating conditions conducive for the voluntary, safe, dignified and sustainable return of Rohingya refugees," the U.N. agencies said in a statement.

They said substantial progress is urgently needed in three key areas covered by the MoU: granting effective access in Rakhine State, ensuring freedom of movement for all communities, and addressing the root causes of the crisis.

Sultan, a Rohingya resident of a village near Maungdaw in northern Rakhine, said security has been tighter in the region since rumors spread that the Arakan Rohingya Salvation Army (ARSA) would attack the region.

He said conditions in the region have not improved amid the struggle for daily survival and restrictions on movement.

"I don't think many refugees will come back to Rakhine if they are not granted citizenship rights," Sultan told ucanews.com. Khin Zaw Win, director of the Yangon-based Tampadipa Institute, doubts the Myanmar government's willingness to accept thousands of Rohingya and suggests the signing of an MoU with U.N. agencies was just for show for the international community.

He said there was no accountability over rights abuses and the Myanmar government's failure to handle the crisis.

Rights groups have called for the voluntary, safe and dignified return of Rohingya refugees that ensures their citizenship, return of homes and property and assurances of security, peace and basic rights.

"Myanmar's failure to take any meaningful action to address recent atrocities against the Rohingya, or the decades-long discrimination and repression against the population, is at the root of delays in refugees being able to go home," Bill Frelink, refugee rights director at Human Rights Watch, said in a report released on Aug. 6.

Bangladesh and Myanmar signed a repatriation deal last November. The process was due to begin in January but Bangladesh postponed it, citing a lack of preparations on its behalf.