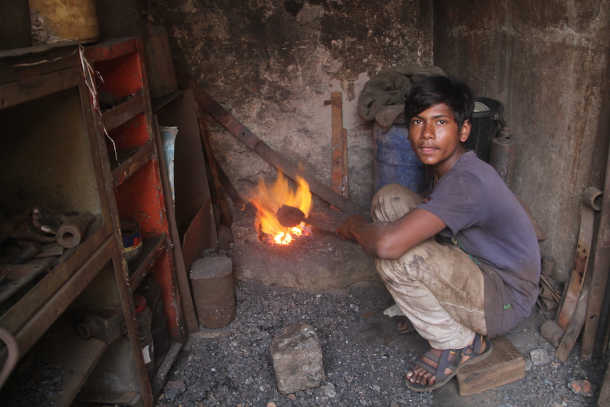 A child worker is seen here at a workshop in Dhaka in this Feb. 16, 2016 file photo. Bangladesh's amended labor law bans child workers in factories. (Photo by Stephan Uttom/ucanews.com)

Proposed amendments to Bangladesh's labor laws, avowedly to make them more worker friendly, have received a mixed response from trade unions and the Catholic Church.

The amended law would reduce required factory worker participation to form a trade union from 30 percent to 20 percent and cut the maximum time for approving union registration to 55 from 60 days.

Further, the currently unrestricted power of the director-general of the Labor Department to revoke union registrations would be curtailed.

And there is provision for formation of a Tripartite Consultation Committee (TTC), to resolve disputes, comprising representatives of workers, factory owners and the government.

Babul Akhter, president of the Bangladesh Garment and Industrial Workers' Union, welcomed the thrust of the reforms, but remained skeptical about loopholes allowing continued exploitation.

For example, he described penalties as absurdly low.

Maximum fines include 5,000 taka (US$59) for illegally employing a child and 25,000 taka for failing to provide paid maternity leave.

"Factory owners make lots of money and they can easily violate the provisions with their financial capacity," Akhter told ucanews.com.

He also disputed the efficacy of the lowered 20 percent requirement of worker membership at factories for trade union registration.

One flaw was that employers could collaborate with labor officials to dismiss employees willing to join a union, he warned.

Father Albert T. Rozario, parish priest of St. Joseph's Church in Savar, an industrial hub near the capital, Dhaka, said practical application of the amended law would be difficult.

"There are laws for everything in Bangladesh, but they are not properly implemented unless there is massive pressure at home and abroad," Father Rozario, a Supreme Court lawyer, told ucanews.com.

"The real problem lies in a lack of respect for justice, equality and fairness."

While hoping the new measures would be properly applied, he cautioned that failure to do so would globally tarnish Bangladesh's image.

Bangladesh faced massive international criticism following a number of deadly factory fires and the 2013 collapse of the Rana Plaza garment factory complex in Dhaka with the loss of more than 1,100 lives.

Such calamities and on-site accidents resulted in the deaths of several thousand workers during the past three decades, highlighting hazardous workings conditions in nation's industrial sector.

Following a backlash, the government and many international brands initiated long overdue reforms, not least in Bangladesh's key US$25 billion export-oriented garment industry.