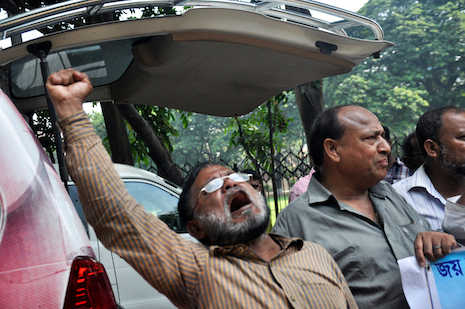 Bangladesh's government has slammed Amnesty International for a recent statement in which the rights group criticized the country's war crimes tribunal.

The government has sent a letter to the London-based group to demand an apology for its remarks about the tribunal and pro-independence fighters in the 1971 liberation war against Pakistan, deputy foreign minister Shahriar Alam told the United News of Bangladesh news agency Nov. 10.

It criticized the trials that led to the death sentence for Ali Ahsan Mohammad Mojaheed, secretary-general of the hard-line Islamic Jamaat-e-Islami party, and Salauddin Quader Chowdhury, a senior figure in the Bangladesh Nationalist Party, the country's second-largest political party.

Mojaheed and Chowdhury were sentenced to death in 2013 and their convictions were upheld by the Supreme Court in June and July this year. Their final appeals are due to be heard on Nov. 17.

"Their trial and appeals process were clearly flawed and since they now face the death penalty the ultimate miscarriage of justice may be only days away," said David Griffiths, Amnesty's South Asia research director.

"The crimes committed during the war of independence were horrific, but the death sentences only perpetuate violence. The lack of fair trials makes the use of the death penalty even more disturbing," he added.

Pro-independence forces also committed serious crimes, but no one has been investigated or brought to justice for them, the statement alleged.

Bangladesh objected to the statement in a strongly worded letter.

"This is exactly the kind of misleading propaganda run by those who opposed Bangladesh's independence in 1971, continue to work against Bangladesh's sovereignty and independence, and remain on the side of those convicted of crimes against humanity and genocide."

"There are no grounds to question the fairness, competence and impartiality of the war crimes tribunal. The government … has given the defendants every opportunity to defend themselves, appeal, seek reviews and even plea for presidential clemency," said Father Albert Thomas Rozario, convener of the Justice and Peace Commission in Dhaka Archdiocese.

"Amnesty might have gone too far, but the government should not have sought an apology," said Father Rozario, who is also a Supreme Court lawyer.

"As a Christian I don't support the death penalty, but people responsible for mass killing and other heinous war crimes deserve prosecution and capital punishment," she said.

"Amnesty's criticism is unfair because it defends war criminals, and goes against the people and parliament of an independent nation," said Costa, coordinator of Hotline Human Rights Trust Bangladesh.

Bangladesh gained independence from Pakistan in 1971 after a nine-month war. An estimated 3 million people were killed and between 200,000 and 300,000 women were raped by Pakistani soldiers and local collaborators, Bangladeshi authorities say.