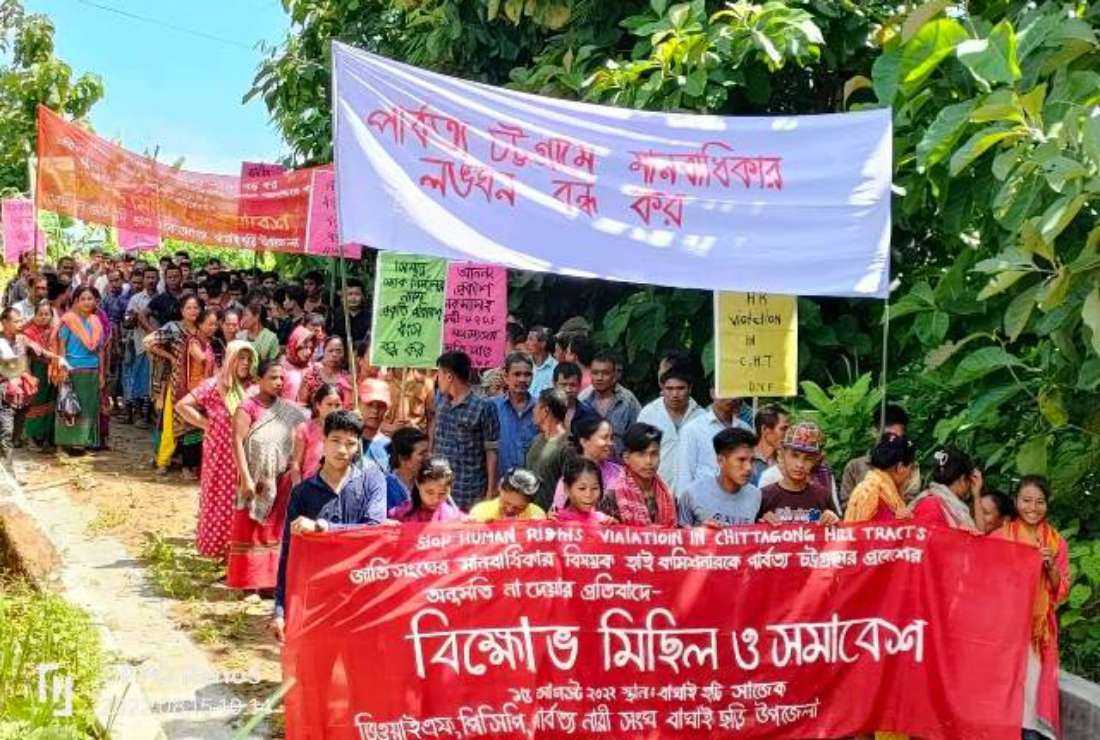 Several organizations and activists participated in a march and organized a human chain as a mark of protest as UN High Commissioner for Human Rights Michelle Bachelet concluded her official visit to the South Asian nation on Aug. 17.

The protestors claim the government did not allow Bachelet inside the hill tracts of the Chittagong division in southeastern Bangladesh, bordering India and Myanmar settled by indigenous tribes, to hide rights violations by its officials.

“We have learned from reliable sources that the chairman of the United Nations Human Rights Commission wanted to come to get information about human rights in the Chittagong Hill Tracts but was not given permission by the government,” said Rinisha Chakma, who leads a women’s association in the area.

Chakma told UCA News that the denial proved government intend to cover up the violations of human rights.

Indigenous leaders, speaking at the protests, alleged violations including extrajudicial killings, disappearances, abductions, land dispossession, torture of women, and demanded the withdrawal of the military rule in the hill tracts.

Hill Women’s Federation leader Nity Chakma said they want Bachelet to come and see the conditions of the indigenous peoples and witness the injustices that are being done to them.

“How long the injustices against us will continue? We don’t want to lose a single person, we don’t want any mother and sister to be raped, and we don’t want Bengalis to be sent as our rivals. We want peace and withdrawal of military forces from the hills,” she said.

The area has seen an influx of landless Bengali Muslims since Bangladesh’s independence from Pakistan in 1971. Until then the hilly, forested region was inhabited by dozens of Tibeto-Burman ethnic tribal groups for centuries.

This, observers say, was aimed at changing the demographic of the area to check a brewing insurgency by the ethnic tribes.

The increased presence of outsiders has backfired as the tribes are opposed to Bengali settlements sparking social tensions and violence.

“The government does not want peace in the hill tracts and hence has prevented the UN top official from coming here. I strongly condemn it,” said Raphael Tripura, a development worker from Shanti Raj Church of Bandarban district.

Around 3 percent of the region’s some 1 million people are Christians, mostly from Bandarban.

“We want to live in peace, we don’t want murders, disappearances and tortures here,” Tripura, a Catholic father of three, said.

Sources at the Ministry of Foreign Affairs said there was no mention of a visit to the Chittagong Hill Tracts in Bachelet’s schedule for Bangladesh.