Garment workers rally in front of National Press Club in Dhaka on April 5 to demand a pay rise. (Photo by Stephan Uttom)

More than 200 garment workers took to the streets of Dhaka April 5, calling on the government to almost double the monthly minimum wage.

The current minimum wage is 'disproportionate' with the soaring cost of living, they said.

At a rally outside the National Press Club the workers called for the monthly minimum wage to be raised from the current US$68 to US$128 and demanded other benefits including accommodation, travel and medical allowances.

They also called on the government to form a wage board to oversee wage raises and other benefits and threatened tougher action if their demands are not met by May 1, International Labor Day.

"Most garment workers live an unbelievably inhuman life because the salary they get can hardly meets the cost of living," said Kazi Ruhul Amin, secretary of the Garment Workers Trade Union Center, the protest organizer.

Among the protesters was Nurul Islam, 26, a cleaner at a garment factory in Narayanganj district near Dhaka.

"I get 8,000 Taka [US$103] per month which includes overtime. It is very difficult to look after my family as the price of daily essentials and accommodation keep rising. Often, I don't have money to see a doctor when anyone in the family falls sick," Islam told ucanews.com.

"The government and factory owners must pay heed to our demands to help workers and the garment industry survive," he added.

A senior official from the Bangladesh Garment Manufacturers and Exporters Association  says the workers' demands can only be considered if they are "truly logical."

"If the current minimum wage is disproportionate, there would be pressure from the government for a rise but there is none. We have to see and think if their demands are logical and necessary before we can  consider them,” said Abdullah Hil Rakib, an association director. 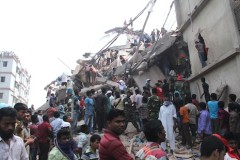 Ranjon F. Rozario, the Dhaka regional director of Catholic charity Caritas, said the garment workers' demands are fair and logical and should be  considered.

"Last year, government employees saw a massive pay hike (91-101 percent), but people whose efforts to keep the country running remain deprived. It seems the workers might need to take to the streets again to press home their logical demands," Rozario told ucanews.com.

In 2013, Bangladesh government raised garment workers wage about 70 percent from US$38 per month, amid pressure from national and international labor groups in the wake of Rana Plaza factory collapse in 2013 and Tazreen factory fire in 2012, which combined killed more than 1,200 workers and injured thousands more.

Bangladesh's US$25 billion garment industry is second largest in the world after China, supplying clothes for high-street Western brands. The industry accounts for 80 percent of the country's annual foreign exchange income and employs around 4 million, mostly female workers.

However, the industry is blamed for poor labor practices including low wages, abuses and appalling working conditions, often leading to labor unrest and protests.