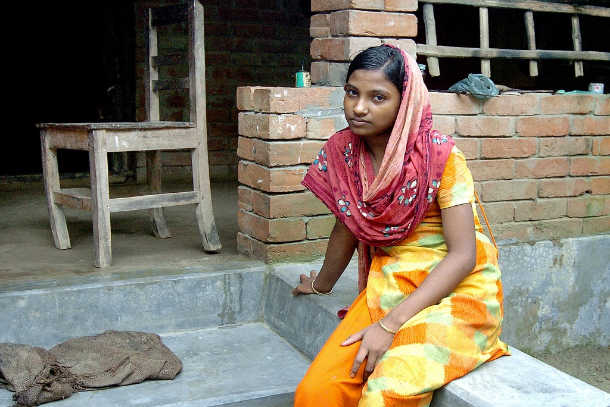 This Bangladeshi girl is among the two million people the UN Children's Fund estimates are trafficked globally each year. (Photo: Farjana K. Godhuly/AFP)

Bangladesh's government is to set up special tribunals to expedite trials in human trafficking cases as the nation faces criticism for not doing enough to combat the crime amid a looming threat of US sanctions.

Law Minister Anisul Huq said seven special tribunals will be set up in seven divisional cities from next month to speed up the trial process in human trafficking cases.

Observers and anti-trafficking campaigners hailed the move but noted that it is mostly due to criticism at home and abroad over the extremely low conviction rate in human trafficking cases and imminent sanctions by Washington for not making significant efforts to tackle the crime.

“Bangladesh passed the Prevention and Suppression of Human Trafficking Act in 2012 and has the National Action Plan 2018-22 to combat human trafficking, but the output is zero. Special tribunals are not supposed to be formed only in divisional cities but in all 64 districts in the country,” Abu Morshed Chowdhury, president of Cox’s Bazar Civil Society, an anti-trafficking group, told UCA News.

According to police, about 10,000 people, mostly women and children, have been trafficked out of the country and about 5,000 cases have been filed against traffickers since 2013.

However, only 30 cases of human trafficking have ended in convictions and several cases were dismissed due to poor police investigations and lack of witnesses, rights groups say.

Under the National Action Plan, the government formed anti-trafficking committees at district and sub-district level, but they are largely inactive, activists allege.

“People are often confused over smuggling and human trafficking, so a victim is often unaware what to do to take legal action to get justice. In the absence of special courts in localities and the lengthy legal process, victims and witnesses are often reluctant to travel long distances to attend court hearings. There is also no system in place to ensure the safety and security of victims and witnesses, which leads to dismissal of cases,” he noted.

Not just special tribunals but also considering the crime seriously on the part of the government can curb trafficking, he said.

Catholic charity Caritas has been involved in anti-trafficking programs across Bangladesh over the past two decades through Caritas Asia, said James Gomes, regional director of Caritas Chittagong.

“A special tribunal is a welcome move but it has been delayed. If it was in place earlier, many victims could get justice,” Gomes told UCA News.

“Yet tribunals, speedy trials and exemplary punishments would be strong measures against heinous crime like trafficking, and may contribute to reducing it, even though it cannot be uprooted once and for all.”

Caritas offices in areas prone to human trafficking have activities to raise awareness among people against this organized crime, Gomes noted.

“For example, in Chittagong we have a special anti-trafficking project for rural and urban areas to raise awareness about trafficking but also to support victims and their families through counseling and support, as in most cases victims are ostracized by their family and society, and also they are traumatized due to property loss and various forms of abuse,” he added.

Bangladesh was placed on the Tier 2 Watch List in the Trafficking in Persons (TIP) Report by the US Department of State for three consecutive years from 2017-19. As per US laws, the country is not eligible to remain in Tier 2 anymore but faces a possible automatic downgrade to Tier 3.

The annual TIP report measures state efforts to eliminate human trafficking in countries around the world in reference to the US Trafficking Victims Protection Act (TVPA) of 2000.

A Tier 3 country is subjected to serious US sanctions including partial or full restrictions and curtailing of non-humanitarian and non-trade assistance as entailed in the TVPA.