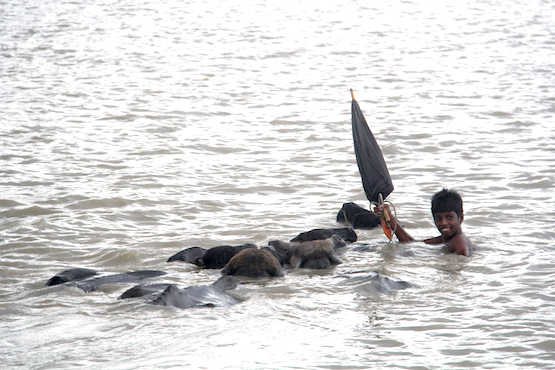 A boy leads a herd of cows through flooded fields in northern Kurigram district of Bangladesh. (Photo by Stephan Uttom)

Umar Ali cannot count how many times floods have churned up his house and dragged his belongings halfway across Bangladesh’s long, flat plains. He guessed about 50 times, nearly one for every year he has been alive.

"Flooding and river erosion have washed away our house regularly as far back as I can remember," Umar, a landless farmer from Kharuar Char, a small island village in northern Kurigram district told ucanews.com.

"A house is all we have in life and when it gets washed away we have nothing left," he continued. "Every time we lose our home, we are forced into misery and it takes months to rebuild and resume a normal life."

Umar and his 10-member family have been living in a makeshift polythene-roofed camp since devastating floods began ravaging most of northern Bangladesh in late July.

The recent flooding, triggered by an onrush of water from upstream India and heavy rain, has killed at least 80 people and left more than 2 million stranded.

Umar's family has received dry food and nine kilograms of rice from the government in emergency flood relief.

Caritas, the Catholic Church’s social service agency, offered cash handouts of 4,000 taka (US$ 51) and water and sanitation kits worth 1,200 taka.

Like Umar, Hamed Ali has been living in a temporary flood camp with his six-member family since floodwaters destroyed his house. His family has been living on handouts too.

"My house was hit by neck-deep water and all I could do was flee with my elderly mother, wife, four children and livestock," said Ali, a day laborer.

"When we go home, I will repair the damage and buy school essentials for my children."

Emergency education for affected children is in short supply in the tarpaulin towns where homeless people wait out the deluge.

"It’s important our children are educated as it could change our lives," Hamed explained.

An estimated 10,000-15,000 people like Umar and Hamed live on dozens of small islands in northern Bangladesh. They are vulnerable to flooding as 75 percent of houses there are made from flimsy jute sticks and a corrugated tin roof is a luxury afforded by only 25 percent.

Low-lying Bangladesh is located in the world’s largest river delta system and is crisscrossed by about 300 rivers that empty into the Bay of Bengal. Most of the country is just few meters above sea level, making natural disasters like cyclones and flooding extremely common.

The problem is exacerbated by climate change, scientists say.

Caritas has assisted about 8,000 people since July’s floods struck. The agency is currently looking to assist rebuilding efforts with funds from foreign donors.

"People have food, housing, cultivation and employment problems and we are trying our level best to assist them," said Swapan Rozario, program manager at Caritas Dinajpur regional office. "We are contacting our foreign friends so that they can … help [people] to recover their losses."

Due to limited funding and resources, Caritas has had to assess the needs of people and could only assist those in the direst of circumstances, according to Rozario.

"We had to select beneficiaries carefully," he said.

"We need to come up with long-term innovative projects so that people can become self-reliant," he added.

Local leaders and officials admit the truth of Rozario’s point. There are no efforts in flood-prone areas to help people break a cycle that sees their lives destroyed at regular intervals.

"The rivers overflow easily because the river-bed is silted and there has been no dredging or dam development," said Abu Hanifa, chairman of Nayarhat Union Council, a local government body.

"We do not have enough resources to meet needs.... Government and NGOs need to [form] a long-term plan."

The cycle of floods-followed-by-handouts has created a "relief mentality" among affected people, according to Hanifa.

"People have always lived with flooding and depended on aid for survival in the aftermath so they … don’t make an effort to develop themselves independently," he said.

He noted that 420 out of 446 hectares of cropland have been inundated by floodwater this year.

"We have not been able to introduce flood-resistant crops yet and precautionary measures to save crops are inadequate," Rahman explained.

"We try to live happily but natural disasters snatch away our dreams," said Abdul Quaium, 28, one of a handful of college graduates from Nayarhat.

Quaium’s family has lost its home 15 times and has had to start over each time.

"Our happiness has no stability," he said. "We know it won’t last long because we can’t get rid of this problem." A man stands in front of flood-affected houses in southern Jessore district of Bangladesh. (Photo by Stephan Uttom)