Relief efforts are hampered by rains affecting more than 1.5 million people in the northeast region 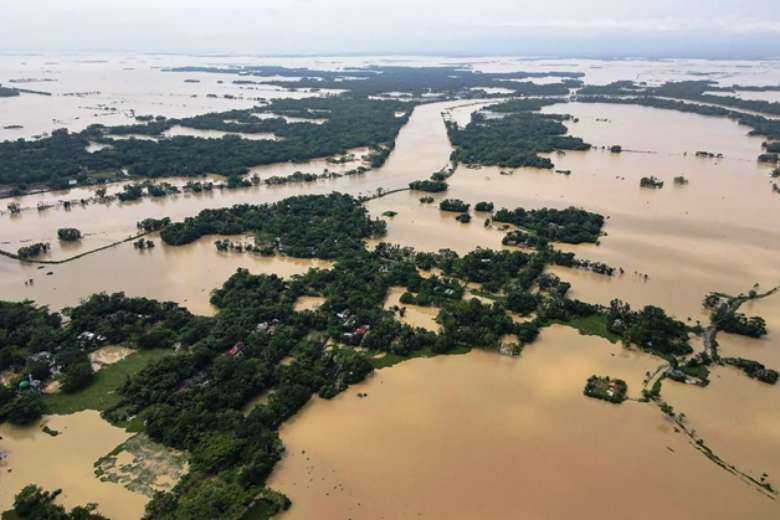 At least 10 people were reported dead and around 1.5 million were affected even as northeast Bangladesh's worst floods in nearly 20 years began to recede.

Heavy rains during the past week or so caused several areas in Sylhet district to go under water while people suffered food shortages, lack of health services and crop losses, especially rice.

“The floods hit almost 60 percent of Sylhet and about 45 percent of neighboring Sunamganj district,” Arifuzzman Bhuiyan, the head of the Flood Forecasting and Warning Centre of Bangladesh, told UCA News.

“The water is receding due to lack of rain in the last few days but if it rains, the situation may deteriorate further.”

Flood victims could not get out of their houses as there was water all around. Food stored in the houses of many people has been washed away by the water.

With the communications system broken, desperate flood victims were left to wait endlessly in the hope of relief reaching them.

"Getting out of the house and going to work has become difficult. The rise in prices of essential items has put me in a lot of trouble"

Farmer Abdul Gani, 45, lives with his wife and two children in Jakiganj area of Sylhet. He planted paddy on his own land but his entire crop was lost as floodwater swamped his fields.

“We never had to buy rice, but in the last few days all the rice in our house has been ruined. The paddy in the fields has also been damaged. Now we have to rely on government relief but that is not enough,” Gani, who has moved with his family to a relative’s house, told UCA News.

Sumon Nokrek, 49, of Sylhet city said he had never seen such floodwater in recent years and never known so much suffering.

“I could not even imagine that so much water could fill in Sylhet city. Getting out of the house and going to work has become difficult. The rise in prices of essential items has put me in a lot of trouble,” Nokrek, a Catholic, told UCA News.

Sylhet district’s deputy commissioner Mohammad Mojibar Rahman said the flood situation has improved slightly. However, water has not yet receded completely in flooded areas. The government is providing all kinds of assistance to flood victims of the 13 subdistricts and 328 shelters have been opened.

“The unexpected flood levels have affected relief activities but we hope to step up our efforts very soon,” Rahman told UCA News.

Caritas Bangladesh is preparing for distribution of emergency food and hygiene kits among flood victims in the Sylhet region, said program officer Chandan Rozario. “The water has started to recede now but if it rains again it could pose a problem,” he said.