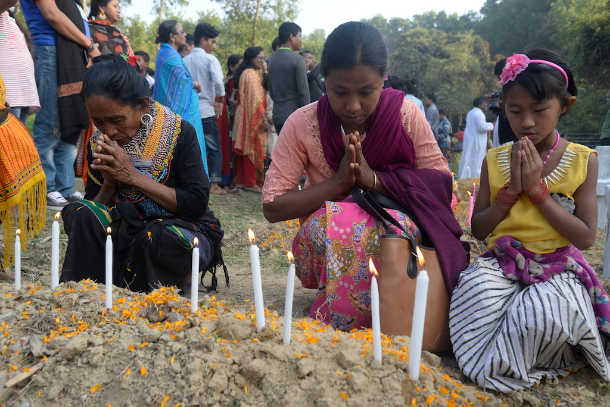 Catholics light candles at the old cemetery in Diang, in Bangladesh's Chittagong Archdiocese, where 600 early Christian martyrs were buried in 1607, as they celebrate 500 years of Christianity in the country on Feb. 7, 2019. (Photo by Piyas Biswas/ucanews.com)

Thousands of Catholics celebrated 500 years of Christianity in Bangladesh by paying tribute to early missionaries, martyrs, and Mother Mary from Feb. 7-8. The celebrations coincided with an annual pilgrimage to the popular Our Lady of Lourdes shrine in Diang, Chittagong Archdiocese.

About 7,000 people including 11 bishops, 75 priests, 18 religious brothers and 80 nuns flocked to the two-day program.

On Feb. 7, they paid tribute to early Christian martyrs who were buried in Diang's old cemetery in 1607.

That massacre followed the martyrdom in 1602 of Portuguese Jesuit priest Father Francesco Fernandez at the hands of the Arakanese, four years after he became the first Catholic missionary to set foot in Chittagong and Diang.

The Vatican made Chittagong the seat of East Bengal Vicariate in 1845. It fell under the control of Dhaka Diocese from 1886-1927, when the Holy See created Chittagong Diocese. This was elevated to an archdiocese in 2017. Thousands of Catholics take part in a candlelight Rosary procession at the Our Lady of Lourdes shrine in Diang on Feb. 7. (Photo by Piyas Biswas/ucanews.com)

In remembrance of its fabled history, hundreds of Catholics climbed the hilly roads of Diang this month to honor those early martyrs and missionaries by offering flowers and lighting candles on their ancient tombs.

Apostolic Nuncio Archbishop George Kocherry and Holy Cross Archbishop Moses M. Costa of Chittagong also unveiled a new "Rosary Garden" in the shape of rosary beads at the Marian shrine as a sign of respect.

Those who turned up were treated to a documentary charting the arrival of the first Christians in Chittagong, as well as the various success stories and tribulations of the Church over the last five centuries.

"Five hundred years is sign of fullness, a matter of pride, joy and new inspiration for us. This is a calling for us to be missionaries and move toward a new way of serving the people," Archbishop Costa told ucanews.com.

The prelate said a plan to build a monument to commemorate those early martyrs and missionaries was in the process of being thought out.

"The massacre of the 600 Christians took place on Nov. 14, so we would like to declare that date Martyrs Day," he said.

On the afternoon of Feb. 7, thousands of people joined a candlelight Rosary prayer procession around the hills of Diang. Devotees prayed, sang Marian songs, and made stopovers on the road as they took time to reflect and pray.

Catholics have been making this pilgrimage for nearly 40 years, thanks in part to the charitable and promotional efforts of Brother Flavian Laplante, a Holy Cross missionary from Canada.

He devoted himself to providing education and social services for the poor and needy in Diang in the 1940s and set up the Marian grotto and ashram (hermitage) in 1946 so people could flock there to pray. It was designated a shrine three decades later.

Brother Flavian died in 1981 and was buried nearby. In 2009, he was declared a "Servant of God," the first step toward sainthood.

On Feb. 8, Archbishops Kocherry and Costa joined a number of bishops in offering a special Holy Mass at the shrine.

"Today, we gratefully remember the martyrs of Diang and Chittagong, who shed their blood to keep up their faith. Our faith is a legacy of their extraordinary faith and their holy blood," Holy Cross Bishop Lawrence Subroto Howlader of Barishal Diocese said during the homily.

"Jesus grew up in Nazareth and [the Christian] faith was born there, after which it spread all over the world. Similarly, Christianity took root here in Diang before spreading all over Bangladesh," the nuncio said.

"We all have a duty to propagate our faith to others," he added.

Maolana Amzad Hossain, a Shia Muslim imam, said it was important the different religions remembered their commonalities instead of their differences.

"Muslims call the creator Allah and Christians call him God. He is the same person," he said. "This understanding is crucial for interfaith dialogue as we seek the way to harmony and peace."