Family members and relatives of the victims of enforced disappearances hold a rally in front of the National Press Club in Dhaka on May 25 to demand justice and the return of their loved ones. (ucanews.com photo)

About 500 people have become the victims of enforced disappearances and extrajudicial killings in the South Asian nation since 2009, say local and international human rights watchdogs.

Bangladesh introduced a Torture and Custodial Deaths (Prevention) Act in 2013 but the groups say it has been largely ineffective.

In many cases, victims of disappearances were supporters of opposition political parties, with law enforcement agencies often accused of eliminating rivals inside and outside the ruling Awami League party, which has been in power since 2008.

Jasmine Nahar, 25, a Muslim and wife of Dr. Mokhlesur Rahman from Satkhira district in southwestern Bangladesh, wants back her husband, who vanished while in police custody three years ago.

“My husband was a well-known doctor but a non-political person, yet plainclothes policemen detained him on April 4, 2016, without a warrant,” Nahar said. “I visited him in jail for the next three days but on April 8 I found he was not there. He has vanished without trace.”

Nahar claim police have refused to give her the whereabouts of her husband and declined to even accept her report of his disappearance, which she tried to file several times on the general diary for missing persons.

Nahar was eventually able to file a petition at the High Court, thanks to the support of a human rights group, in order to get back her husband.

To her shock, however, police submitted a reply to the court order, denying that anyone named Mokhlesur Rahman had ever been detained.

“It is so frustrating to accept this denial of justice. I don’t know what else I can do to get him back,” she said in desperation. 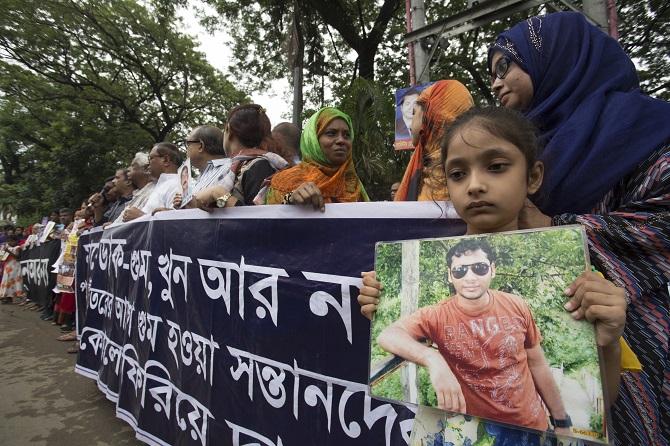 A girl holds a picture of a man, possibly her father, at a rally in Dhaka in May to demand the return of loved ones. (ucanews.com photo)

Bangladesh has faced criticism at home and abroad due to a series of disappearances and a recent deadly anti-drug crackdown.

A Bangladeshi delegation attended the review under the Convention against Torture and Other Cruel, Inhuman or Degrading Treatment or Punishment from July 29 to Aug. 8 in Geneva, held by the United Nations Committee Against Torture. It was the first time the country had attended the review after ratifying the convention more than 20 years ago.

The committee urged Bangladesh to put an end to the increasing numbers of disappearances and listed a set of recommendations including thorough investigations of all disappearances, plus the prosecution and punishment of officials found responsible.

However, Bangladesh law minister Anisul Huq, who attended the review, told the committee the country had taken sufficient measures under the convention to prevent torture and custodial deaths.

The cases of enforced disappearances and denial of justice are unprecedented and unacceptable, says Nur Khan, a rights activist in Dhaka.

“Disappearances and extrajudicial killings take place in other countries, but they have justice,” he said.

“We have had people go missing for years — police wash their hands of them by saying they know nothing and the court says nothing can be done without evidence. Families and relatives of the victims really have nowhere to seek justice.”

The state cannot escape blame even if it is not involved in such crimes, says Father Anthony Sen, a member of the Catholic bishops' Justice and Peace Commission.

“Disappearance is a shocking and worrying reality,” Father Sen told ucanews.com. “It is up to the law enforcement agencies to dig out and reveal the truth if someone goes missing, but often they turn a blind eye.

“We have seen how law enforcers can also be complicit in such crimes, so there are reasons to believe politically influenced state machinery is being exploited for political interests. This is a dangerous threat to a democracy.”