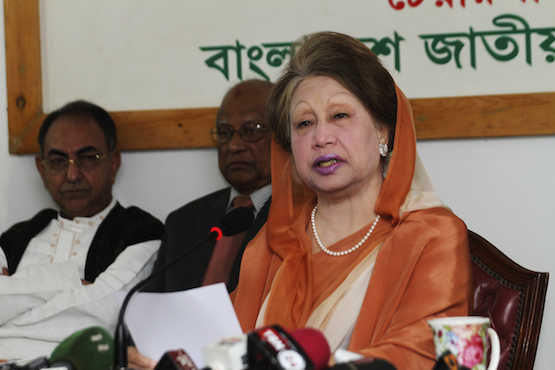 Bangladesh opposition leader Khaleda Zia speaks at a press conference in Dhaka on Feb. 7. She proclaimed her innocence of corruption ahead of a court verdict that authorities fear could spark violence. (Photo by Munir Uz Zaman/AFP)

February is one of the most pleasant months in Bangladesh. Besides enjoyable weather, it features a month-long book fair and a commemoration program dedicated to Language Movement heroes of Feb. 21, 1952. It also showcases the colorful spring festival, Valentine's Day and many other cultural feasts.

But this year, February has come to make Bangladeshis visibly tense and scared.

After a few years of relative peace and stability, Bangladesh is bracing for a political storm poised to hit the entire Muslim-majority nation of 160 million.

A Dhaka court is due to deliver a verdict on Feb. 8 in a corruption case against Khaleda Zia, chief of the Bangladesh Nationalist Party (BNP), the second largest political party.

Ten years ago, a military-backed interim government filed the case, but the ruling Awami League is trying to use it against Zia by all means.

Zia would face up to seven years in jail if found guilty. If so, much of her final years of political life would be spent in prison.

The government is intent on putting Zia in jail and is making all possible moves to shut down BNP supporters from expressing their anger on the streets.

Capital Dhaka is cut off from the country with eight entry points of the city heavily locked down with scores of security personnel. Every vehicle, public and private, is being thoroughly checked to stop BNP supporters from entering the city.

Police and Border Guard soldiers are deployed across the capital to restrict BNP leaders and supporters from gathering and protesting.

It is highly unlikely the court will spare Zia. Even if the court shows her mercy, she has little chance of escaping further harassment.

Zia is facing total 32 cases, most of them politically charged, in various courts despite the BNP not being in power since 2008 and not being the official opposition in parliament for boycotting the national election in 2014.

Zia's party is in tatters with factional divisions, while her heir apparent and only son, Tarique Rahman, has been exiled in London for more than 10 years.

The BNP is politically and organizationally cornered and demoralized due to the ruling party's suppression and its own poor strategy, failing to recognise people's needs and a lack of commitment among party leaders and supporters.

In reality, Zia's BNP cannot stand with the ruling Awami League of Prime Minister Sheikh Hasina. So, why is the Awami League trying to remove Zia from the BNP and politics?

The Awami League is vying to secure a second consecutive re-election in the 11th national poll to be held at end of the year or early next year. It sees Zia as the biggest threat, not because she is actually a threat but because it lacks confidence in whether its performance over its decade in power is enough to secure a public mandate.

How? The big question

Elections and violence go hand in hand in Bangladesh, whether at national or local level. Hundreds die and thousands get injured before and after polls.

Since returning to parliamentary democracy in 1991 following 15 years of military rule, Bangladesh has seen power alternate between the Awami League and the BNP, who are not mere opponents but blood-letting arch rivals.

The center-left Awami League and center-right BNP never trust each other and don't speak equivocally on any national issue.

Since 1996, three elections have been held under non-political and caretaker governments, a system proposed by the Awami League, the then opposition.

The system proved effective in terms of holding "fair elections" but it also paved the way for a military-backed interim government from 2006-08 when attempts were made to cut off Hasina and Zia from politics, infamously called the "minus-two formula." The graft case of Zia was part of the ploy.

In 2011, the Awami League abolished the caretaker system due to exploitation amid opposition from the BNP and all major opposition parties.

The BNP and its allies boycotted the 2014 election after Hasina refused to step down and reintroduce the caretaker system. The boycott, amid massive violence, gave a walkover to the Awami League to win re-election, with more than 50 percent of the 300 seats won uncontested.

The United Nations, U.S. and Britain intervened to end the deadlock before the election but failed.

The BNP's decision to shun the poll was a political blunder for the party. It also helped the Awami League to become authoritarian and corrupt in the absence of an effective opposition.

The BNP won't make the same mistake of walking away.

So, the Awami League is trying in the best possible undemocratic way to discourage the BNP from taking part in the poll, demoralizing the party by arresting and jailing leaders like Zia.

There is every reason for people to fear election-related violence and public suffering.

The BNP has done nothing good over the last 10 years to win voters' confidence. It has not taken a strong stance against the government's illogical policies including a controversial power plant, extrajudicial killings, endemic corruption like bank fraud, and fuel and price hikes.

Moreover, in 2015, the BNP and its long-time ally, the hard-line Jamaat-e-Islami party, were accused of killing people to force the government to step down.

It didn't leave behind Jamaat despite major leaders of the party being accused of war crimes during Bangladesh's war of independence from Pakistan in 1971 and being banned from taking part in the poll.

The BNP-Jamaat regime of 2001-06 was accused of militancy and political killings.

Yet the BNP can return to power with negative voting and the anti-incumbency factor as the Awami League has failed to fulfil the promises it made before the last election.

The government has failed to protect minority groups from communal attacks. Violence against Buddhists in Cox's Bazar in 2013, against Hindus in Nasirnagar and against Catholic Santals in Gaibandha in 2016 are a few major examples of such attacks.

Most banks are tackling a liquidity crisis. The hacking and theft of millions of dollars from the central bank, a huge loan default, forgery and a struggling economy have made people suffer.

The Awami League has failed to check deadly militancy, to save free thinkers and bloggers from the ire of religious bigots, and has appeased radicals by Islamizing school textbooks. It has also attempted to silence the media and critics with repressive laws.

Awami League supporters are accused of attacking people over vested interests and it seems the party has no control over its supporters.

All these negatives lie behind the Awami League's fear that if a fair election is held, the BNP might return to power riding on anti-incumbency and negative votes.

A BNP success would not bring many cheers as the party is Islamist-leaning and many fear militancy might rear its ugly head again.

Moreover, the BNP's return to power would also change the geopolitics of South Asia as the party is considered a favorite of China, while the Awami League is closer to India.

No matter who wins the election, people will suffer as the parties care more about winning and hanging onto power at any cost, even if their actions run counter to the nation's interests.

While the election is poised to be a stormy and violent crucial test for the Awami League and the BNP, the choices are limited and inconvenient for ordinary people.

No one really knows when this spring of discontent will end and how much damage it could do to a fledgling democracy marked by a culture of dysfunctional politics.

Rock Ronald Rozario is a Dhaka-based journalist, writer and bureau chief for ucanews.com in Bangladesh.