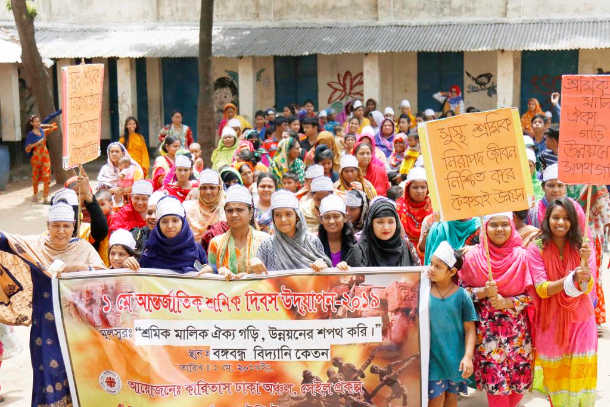 Workers take part in a May Day rally in Bangladeshi capital Dhaka on May 1 to demand their rights and an end to abuses by employers. (Photo by Stephan Uttom/ucanews.com)

Dozens of domestic workers took part in a rally in Bangladesh’s capital Dhaka to mark May Day and called on the government to fully implement a welfare policy to ensure their rights and stop abuses.

About 150 workers, mostly domestic helpers, took part in a daylong program including a rally in the capital organized by Catholic charity Caritas Dhaka.

They called on authorities to implement a welfare policy for domestic workers and turn it into a law to ensure the protection of workers’ rights.

Muslim woman Yeanur Begum, 50, and her two daughters have been working as domestic helpers in Dhaka for years. She and her rickshaw puller husband left Bhola district in the south 35 years ago after losing their house and livelihood due to flooding and to escape poverty.

She said domestic workers are often victims of abuses at the hands of their employers.

“I work in three houses every day and each employer pays me 2,000 taka (US$24) per month. The wage is low compared to the immense workload I have each day,” Begum told ucanews.com.

“Employers were more rude in the past but things have changed. I remember one employer beat me after I accidentally broke a water glass. I think if there was a law for us, we could get a better wage and get protected from abuses by employers.”

Since 2016, the SAIL project has prioritized support for vulnerable people in urban areas including domestic workers, garment workers and day laborers in poor and slum areas, he said.

“Caritas and other NGOs are supporting domestic workers but it is not enough. We have been pressing for recognition of their rights through legal backing from the state,” Miah added.

Wazed Ali, a politician from the ruling Awami League party, admitted that domestic workers’ rights are largely neglected in Bangladesh.

“It is true domestic workers are denied their rights — no fixed working hours, no fair wages and abuses from time to time. The government has formulated a policy and we are pressing for a law to protect the rights of domestic workers,” Ali told ucanews.com.

Although there is no exact figure for domestic workers in Bangladesh, labor groups believe there are about 500,000, according to the Dhaka-based Bangladesh Labor Foundation (BLF).

Most domestic workers have long hours without any specified working conditions.

The Bangladesh government formulated its Domestic Worker Protection and Welfare Policy in 2015, the first move to offer legal protection to such workers in the country.

Among the directives are payment of wages by the seventh day of each month, one month’s notice of redundancy, time for rest, registration of domestic workers, days off and other leave and healthcare costs. The policy also entails wage contracts, hourly basis payments for part-time workers and monthly payments for full-time workers.