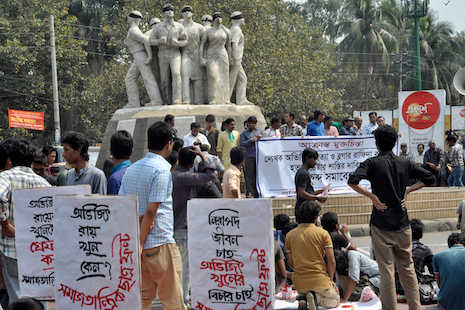 Secular activists march in Dhaka calling for justice for the killing of a Bangladeshi blogger earlier this year. Four secular bloggers have been murdered in the country this year. (Photo by Stephan Uttom)

Bangladesh's failure to deliver justice for a series of murders of journalists and bloggers has drawn sharp criticism from rights monitors and activists, including the church.

The South Asian nation was ranked among the 14 countries in the world with the worst records of violence against journalists and bloggers, according to a report from the New York-based Committee to Protect Journalists.

The group ranked Bangladesh 12th worst in the world on its global impunity index for violence against journalists and bloggers — joining the likes of Iraq, Syria, the Philippines, Sri Lanka, Afghanistan, Pakistan and India.

At least four atheist bloggers have been murdered this year, allegedly by Islamist militants, sparking outrage from faith leaders and the public.

Over the last decade, five of seven victims of unsolved murders were bloggers who criticized religious extremism, the committee said in its Oct. 8 report.

Since 2005, only one case — the murder of journalist Gautam Das — has seen its perpetrators tried and convicted.

"Prime Minister Sheikh Hasina and the nominally secular ruling Awami League party have done little to speak out for justice in these crimes, allowing political interests to trump rule of law," the group said in a statement released with the report.

The culture of impunity that surrounds the killings of journalists is a result of Bangladesh's failed legal system, according to Father Albert Thomas Rozario, secretary of the bishops' Justice and Peace Commission.

"Our judiciary fails to deliver justice because of government influence. Most judges are appointed politically and they often fail to deliver neutral judgment," said Father Rozario, who is also a Supreme Court lawyer.

"This can only change if there is solidarity between political parties to allow the judiciary to be truly independent and to bring an end to the blame game in the greater interest of the nation."

In August, atheist blogger Niladri Chatterjee became the fourth journalist to be killed this year in Bangladesh. He was allegedly hacked to death by Islamist militants. Bloggers Ananta Bijoy Das and Washiqur Rahman and writer Avijit Roy were also killed this year. All had previously written on topics promoting secularism or denouncing religious extremism.

Local police said they have made arrests in all four cases. However, they have also yet to file charges in the cases.

Without the cases proceeding to court, local journalists say, the sort of impunity that allowed the killings to happen in the first place will only continue.

"If criminals don't get punished for crimes, they are encouraged to commit crimes again," said Monjurul Ahsan Bulbul, president of the Bangladesh Federal Union of Journalists.

"As long as the culture of impunity exists, the abuse and killings of journalists and bloggers won't stop."

The state's failure to protect journalists and bloggers — and prosecute perpetrators — poses a great danger to Bangladesh, according to Baki Billah, a prominent blogger.

He sees a direct link between the bloggers' deaths and the recent unsolved killings of an Italian aid worker and a Japanese man.

"If the cases of journalist and blogger killings were taken seriously, the recent killings of foreign nationals would not happen," Billah said.