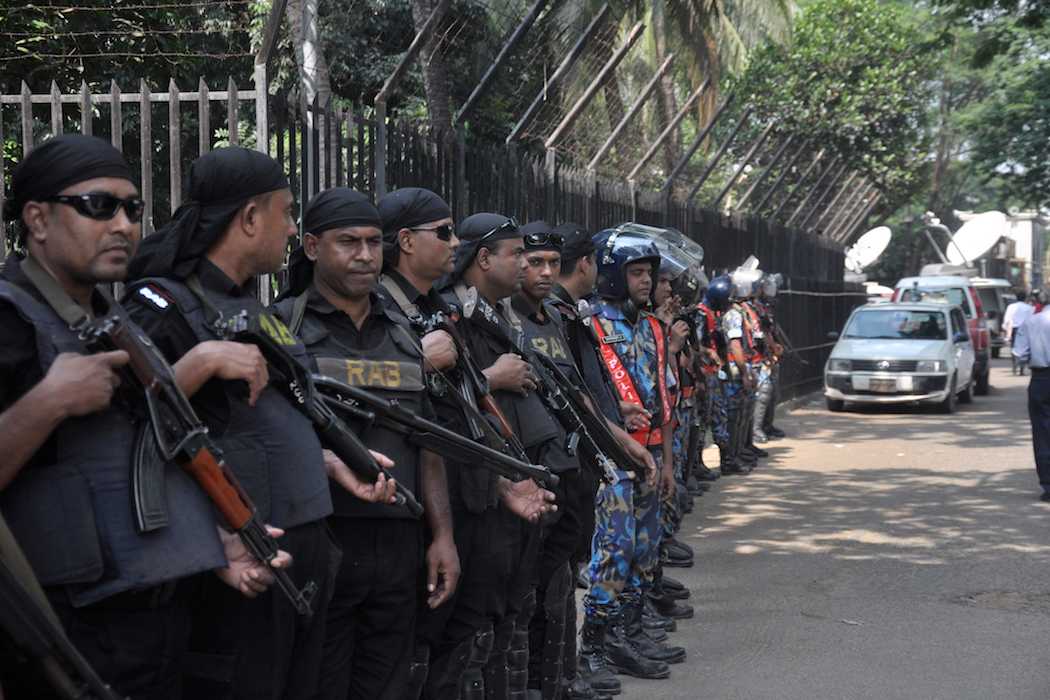 The elite anti-terror Rapid Action Battalion, seen on patrol in Dhaka in November 2014, has been involved in an anti-drug crackdown in Bangladesh since May 19. (Photo by Stephan Uttom/ucanews.com)

Bangladeshi law enforcement agencies have killed 19 alleged drug dealers in a nationwide crackdown that has drawn flak from the church and rights activists.

The elite anti-terror Rapid Action Battalion and other special police units have been conducting raids, arrests and shootouts across the country since May 19.

In total, 26 people including 19 alleged drug dealers have been shot dead in "crossfire" and "gunfights" — euphemisms for extrajudicial police killings.

Home Minister Asaduzzaman Khan told reporters on May 19 that the government is adopting "zero tolerance" to eradicate the drug problem.

"Every good citizen in the country is worried about the drug menace, especially on youth. The drug epidemic must be controlled. But no sane citizen can support extrajudicial killings in the name of an anti-drug clampdown," Father Albert Rozario, convener of the Justice and Peace Commission in Dhaka Archdiocese, told ucanews.com.

Father Rozario, parish priest of St. Joseph Catholic Church in the Savar suburb of Dhaka, said the church condemns killings as they are no solution to the narcotics problem.

"We need to have a strong political commitment for a socioeconomic movement to tackle the drug danger. We have laws to punish those behind the rising narcotics use in the country. The government cannot succeed only with arbitrary killings," added Father Rozario, a Supreme Court lawyer.

"This clampdown is misleading and fear-mongering. Law enforcers say they have killed drug dealers and traffickers, but killing people without prosecution is a serious violation of human rights," he told ucanews.com.

"This climate of fear is against rule of law and undermines democracy. Killing those at the end of the syndicate offers indirect protection for godfathers and masterminds behind the drug menace. This won't bring any good results."

Bangladesh has 6.6 million drug users, according to the state-run Narcotics Control Department. More than 63 percent of drug users are over 15 years of age and addicted to yaba — the local name for tablets with a mixture of methamphetamine and caffeine, produced in Myanmar and trafficked through Bangladesh across Asia.

The southeastern port city of Chittagong, close to the Myanmar border, is a major trafficking point for yaba. About 70 percent of the 7,482 inmates at Chittagong Central Jail are drug addicts, many of them yaba users.