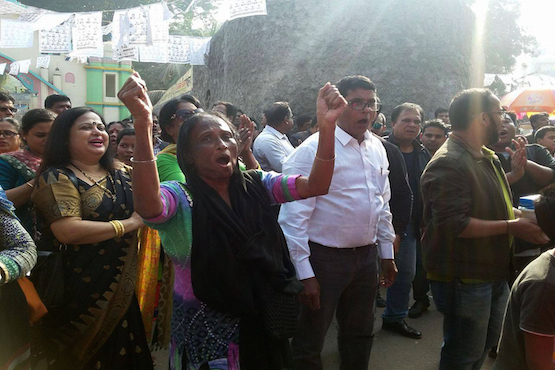 Christians in Dhaka take part in an election campaign for the board of the Christian Cooperative Credit Union Limited on Jan. 6. Amid controversy and bitter rivalry among members, the Supreme Court on Jan. 5 ordered to postpone the election. (Photo by Piyas Biswas)

The Bangladesh Supreme Court has passed a ruling to postpone the election of the governing board of country’s largest Christian cooperative, which was scheduled for Jan. 6.

The Jan. 5 ruling was in response to a writ petition filed by one of two Christian forums contesting the election for the Christian Cooperative Credit Union Limited (CCCUL). They alleged the present management board barred some of their candidates from running in the polls by cancelling their membership.

The union based in Dhaka was founded in 1955, under inspiration from American Holy Cross missionaries Archbishop Lawrence Leo Graner of Dhaka and Father Charles J. Young.

This church-oriented financial institute supports the economic prospects of the Christian community by offering various types of low-interest loans and financial services, which saves them from high interests loans from local loan sharks

Currently, the CCCUL has about 36,000 share-holding members and 47,000 savings account holding members. Its estimated assets are worth some 5Billion Taka (US$66 million), which makes it one of the largest cooperative organizations in Asia.

The controversy started before the 56th Annual General Meeting when the governing board scrapped the membership of seven potential candidates, saying they had been involved in activities against the interests of the organization.

The disgruntled group appealed the decision to the government Cooperatives Department and won back their membership. However, the decision was revoked in December and the group filed a writ petition with the Supreme Court to challenge the decision and postpone the election.

The court has rescheduled the election to Jan 15.

Babu Markus Gomes, president of the board, expressed dismay over the postponement of the election.

"We never wanted this election to enter such a state that the court had to interfere. Yet, we hope members will be able to practice their democratic rights and elect leaders whom they find worthy," Gomes said.

Dipok Peris, a Catholic and candidate for the secretary post from the opposing group, said they never wanted to go to court.

"We would never go to court had the present board not dismissed our membership unlawfully. Everyone has the democratic right to contest in elections, but they wanted to hang onto power through unethical means. I still have doubts whether the election will be free and fair," Peris said.

Raymon Areng, a Garo Catholic and member of the central committee of the ruling Awami League party, expressed frustration over the ‘nasty politics’ of the election.

"There will be conflict in every election in a democratic system, but it is disgraceful and saddening when it turns into a nasty political game. I still hope the Christian community and their leaders will denounce ugly divisions and take part in the election honestly and truthfully," Areng said.