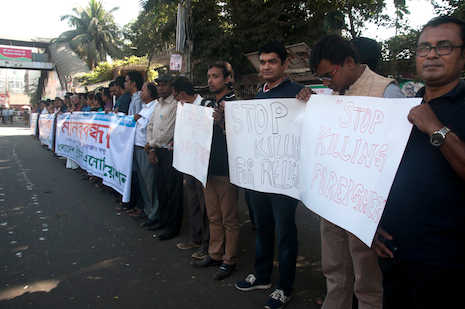 Christians in Dhaka form a human chain to demand justice for recent attacks and threats against Christians. (Photo by Stephan Uttom)

Over the past two weeks, at least seven Protestants have received death threats in the form of text messages. It comes after violent attacks on a Catholic priest and a Protestant minister.

Christian leaders say the attacks and death threats are interlinked.

"The attempted murders of a priest and a pastor, and the death threats, are correlated. A vested group, presumably religious fanatics, is targeting Christian leaders and institutes," said Nirmol Rozario, secretary of the Bangladesh Christian Association.

"Christians are scared and confused because they are being targeted for no apparent reason. The government must act immediately to find out who the culprits behind these crimes are and punish them," Rozario added.

The Rev. Martin Adhikari, principal of Dhaka's College of Christian Theology Bangladesh, said he has been living in fear after he started receiving death threats via text message earlier in November.

"Eat whatever you like the most. Only five days are left. Not more than that," read a Nov. 11 message.

"One day has elapsed. Should we arrange your burial or let your family do it? Inform us today," read another sent the following day from the same number.

"I have been forced to limit my movements since receiving the threats. If I need to go out, I take two people with me for safety," Adhikari said.

"Religious extremists might be behind the threats, and their intention is to frighten the Christian community by killing some of their leaders," he said.

More than 200 Christians took to the streets of Dhaka on Nov. 21 to protest against the spate of death threats and attacks.

Christians from various denominations marched and formed a human chain in front of the National Press Club in Dhaka to demand swift government action and the arrest of the attackers.

The Bangladesh Christian Association organized the protest in response to attacks targeting Catholic and Protestant clergymen in the country.

On Nov. 18, three gunmen shot and seriously wounded Italian Father Parolari Piero, 64, a member of the Pontifical Institute for Foreign Missions, in the northern town Dinajpur.

The group calling itself the Islamic State claimed responsibility for the shooting.

Attacks on Christians have usually been rare in the predominantly Muslim country of 160 million people.