Bangladesh has been criticized by a global human rights watchdog for denying education to children of Rohingya refugees from Myanmar.

The 81-page report, “Are We Not Human?’: Denial of Education for Rohingya Refugee Children in Bangladesh,” documents how Bangladesh prohibits aid groups from providing Rohingya children with accredited or formal education.

There is no secondary-level education, while groups are barred from teaching the Bengali language and using the Bangladesh curriculum. Rohingya children have no opportunity to enroll in or continue their education at private or public schools outside the camps, the report said.

“Bangladesh has made it clear that it doesn’t want the Rohingya to remain indefinitely, but depriving children of education just compounds the harm to children and won’t resolve the refugees’ plight any faster,” said Bill Van Esveld, associate children’s rights director at HRW.

“The government of Bangladesh saved countless lives by opening its borders and providing refuge to the Rohingya, but it needs to end its misguided policy of blocking education for Rohingya children.”

The report reflects the reality in terms of education for children in the camps, refugees and aid workers say.

Two young children of Abul Kalam, a Rohingya community leader in Kutupalong refugee camp, attend a child-friendly space that allows education up to grade two in the Burmese and English languages.

“But I have two unschooled sons aged 15 and 13, as there is no education opportunity for refugee children beyond grade two. Whether we stay in Bangladesh or go back to Myanmar, our children will have no future without education,” Kalam, 36, told ucanews. 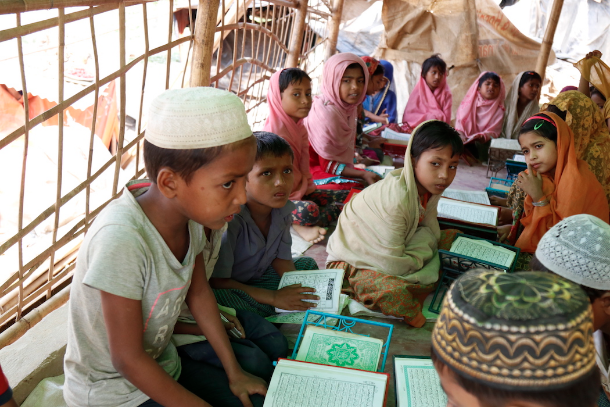 “We are grateful to Bangladesh’s government for allowing us to stay here, but we appeal to allow our children to have education so that they can have a better life.”

“There is no denying the finding of the report, but the issue poses a serious crisis for the government. It faces international pressure to allow education to children, but it fears that with education the future generation of Rohingya might prefer to stay in the country instead of returning to Myanmar,” Sharma told ucanews.

“It is understandable that without proper education Rohingya children have no future and remain vulnerable to crimes. The better deal would be to develop a separate curriculum for Rohingya children and allow them to get basic education.”

Jyoti F. Gomes, secretary of the Bangladesh Catholic Education Board, has similar concerns.

“Education is a universal human right, so it is legitimate to criticize blocking education for refugee children. Whether Rohingya are allowed to go back to Myanmar or forced to stay back in Bangladesh, without education Rohingya will become a burden,” Gomes told ucanews.

“Every refugee camp has non-formal education centers for Rohingya children, while two registered camps set up earlier follow Bangladesh’s curriculum. We are working on how to extend education to more children and what curriculum to be used,” Talukder told ucanews.