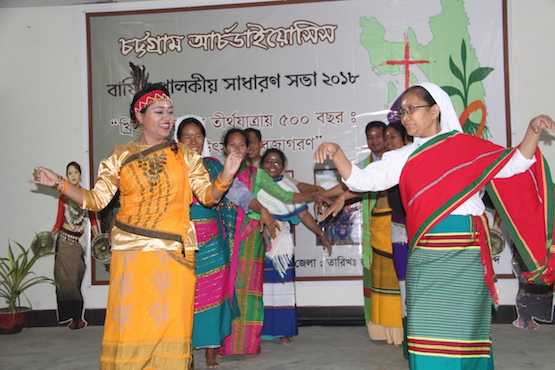 Salesian nuns join indigenous Catholics in performing a traditional dance at a pastoral gathering at Queen of Fatima Catholic Church in Bandarban district of southeastern Bangladesh on Jan. 19. (Photo by Rock Ronald Rozario/ucanews.com)

With inspiration from European missionaries who brought the Christian faith to this part of the world 500 years ago, Catholics in Chittagong Archdiocese are being urged to celebrate their "heritage of faith."

"Our faith in Christ is a precious gift from God that came to us through missionaries. We need to know our heritage so that we can celebrate our richness of faith in order to become a living, participatory and new church," said Holy Cross Archbishop Moses M. Costa.

The prelate made the call to 115 clergy, religious and lay representatives from 11 parishes and two sub-centers in the archdiocese during a pastoral gathering at Queen of Fatima Catholic Church in Bandarban district of southeastern Bangladesh from Jan. 18-20.

The gathering for the special jubilee year, which started on Dec. 10 last year, was entitled "Heritage, Celebration and Renewal," the theme of year-long jubilee celebrations.

They also took part in group discussions and outlined pastoral activities based on the topics for their parishes and outstations during the jubilee year and beyond.

"The first part is heritage — we look back 500 years at what we have received from the missionaries. What are the reasons we need to celebrate? At the same time it gives new inspiration to be a new church," Archbishop Costa told ucanews.com on Jan. 19.

The prelate said the archdiocese is prioritizing thematic faith formation and catechism of various groups — families, children and youth, catechists, teachers, priests and religious and social workers — during the year.

"It will help us to understand what the church really means and what faith will do for us. One of the topics is incarnation — why Jesus came to this world — so it's one of the reflections. Then we will reflect on family, on the church, what the church means for us, so we have the right identity as the church," Archbishop Costa said. Archbishop Moses M. Costa of Chittagong with participants at the pastoral gathering at Queen of Fatima Catholic Church on Jan. 20. (Photo by Rock Ronald Rozario/ucanews.com)

Agatha Tripura, a laywoman and housewife from Queen of Fatima Parish, said the assembly had boosted her life of faith.

"We have a small church in our village where I was president of the church committee. I am also a member of the Legion of Mary group. The learning I have had here has provided lifelong lessons for me," she said.

"In my village, I will share my learning and experience with my family, relatives and everyone I come across."

Sister Hanima H. Tripura said she felt blessed and honored to hold the heritage of faith.

"I am proud to realize our faith is a heritage and the fruit of many people in a journey of 500 years," Sister Hanima from Little Handmaids of the Church congregation told ucanews.com.

"Missionaries and Christians shed blood and lives for their faith. They have become witnesses of Christ amid persecution and didn't stop preaching love of Christ and serving people. Their life of faith is an inspiration for us."

In 1845, Chittagong became the seat of the first East Bengal Vicariate and the territory was entrusted to Dhaka Diocese in 1886. Chittagong Diocese was created in 1950 and was elevated to an archdiocese on Feb. 2, 2017, with Moses Costa as the first archbishop.

The final jubilee celebration is scheduled for November when Cardinal Fernando Filoni, prefect of the Vatican's Congregation for Evangelization of Peoples, is expected to attend.