Bangladesh bids farewell to a year of despair

Environmental, economic and political woes, alongside growing authoritarianism has made millions suffer 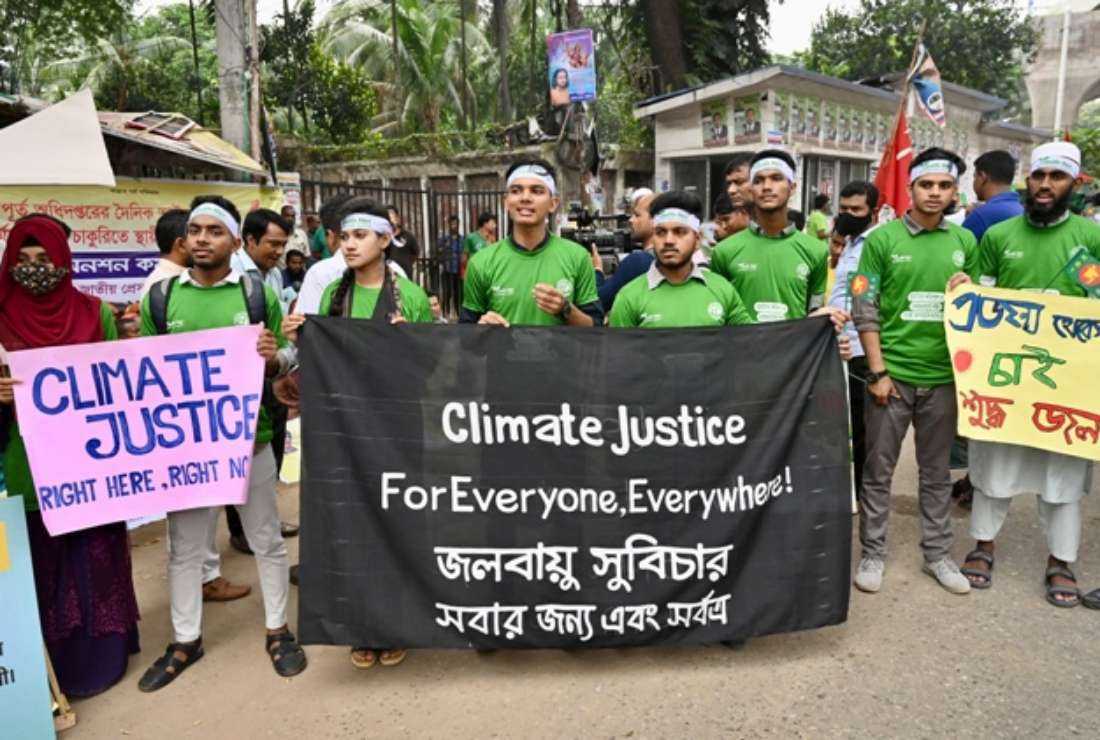 Bangladesh activists take part in a rally to mark the Global Climate Strike in Dhaka on Sept. 23. (Photo: AFP)

It has been a year of despair for millions of people in Bangladesh due to great difficulties triggered by natural and manmade disasters, economic blowbacks, and political uncertainties.

Despite the poor handling of the Covid-19 pandemic over the past few years, the Muslim-majority nation of about 165 million managed to overcome a major economic meltdown.

However, poor governance, unrealistic development, endemic corruption, lack of accountability, and muzzling of free speech under an increasingly authoritarian Awami League regime have led to an erosion of democracy and freedoms and deeper suffering of millions.

Bangladesh and other South Asian nations including India and Pakistan experienced the worst flooding in two decades, leaving more than 3,000 killed.

About 141 died in Bangladesh, mostly in the northeast in May and June. While excessive rainfall was blamed for flooding, experts lambasted the unrealistic construction of roads, bridges, and culverts in low-lying areas that blocked the natural flow of water from upstream to the sea.

The government’s failure to dredge rivers and repair river embankments effectively worsened the crisis. The misery of flood-affected people made global headlines, but the question is whether the government will learn a lesson and save vulnerable communities before the next floods hit.

Cyclone Sitrang lashed Bangladesh at the end of October. Though the storm, one of the strongest in decades, weakened by the time it made landfall, at least 35 were killed and thousands made homeless.

One of the world’s most adversely affected nations due to climate change, Bangladesh is likely to endure more cyclones if the global community fails to support poorer nations facing the brunt despite having a little role in the climate crisis.

Fire tragedies are common in Bangladesh and thousands have perished in industrial fires in past decades. This year, a deadly fire at a shipping container depot in Chittagong killed at least 41 and injured about 300. It came less than a year after a food factory fire claimed 52 lives, mostly child workers.

Such tragedies are nothing but the collective failure of a nation where fire and safety rules are routinely flouted, offenders enjoy impunity, and poor people pay the high price. Such a pathetic scenario is unlikely to change in the new year as people in power will continue to side with heartless bigwigs who put profits before people.

Bangladesh marked 50 years of independence in 2021, but it has failed miserably to ensure constitutional freedoms and rights for all citizens. Vaguely defined repressive laws like the Digital Security Act make dissent, free speech, and press freedom punishable offenses with lengthy jail terms and hefty fines. Besides legislative, executive, and judiciary all constitutional bodies have been made to tow the government line. Democracy and freedoms remain under serious threat in the increasingly authoritarian state.

The Awami League government’s biggest success story was the opening of the 6.15-kilometer Padma Bridge in June. This longest bridge in the country connects impoverished south and southwest regions and is expected to improve economic conditions.

However, joy over this success did not last long as the nation’s economy crumbled due to the global crisis triggered by Russia’s invasion of Ukraine, massive looting in the banking sector, and misleading government economic policies.

Bangladesh has overspent on a series of mega infrastructure projects such as the Padma Bridge and the first metro rail line in the capital Dhaka. Now, foreign reserves have dwindled to US$27.5 billion, the lowest in decades, while income from exports has dropped.

Inflation hit a record high and prices of daily essentials have skyrocketed due to a record 50 percent spike in fuel prices, which hit hard and angered millions. Yet, Bangladesh escaped a Sri Lankan-like crisis thanks to its export-oriented garment sector and remittance inflow from expatriate workers.

Yet the government seems unmoved and continues to ignore public suffering due to economic downturns. The new year is unlikely to bring any solace to millions, and this frustration will be a deciding factor in the next general election.

After three years of relative peace, confrontational politics has returned to Bangladesh, ahead of national elections due in December 2023.  The Awami League has been in power since 2009. It was accused of rigging the 2014 and 2018 elections and despite much criticism at home and abroad, the government has survived thanks to unfettered support from its longtime ally, India.

The popular perception is that the Awami League will be defeated in a free and fair election. However, holding elections remains a contentious issue. The Election Commission is a toothless tiger as the government refuses to empower it adequately.  The opposition Bangladesh Nationalist Party and its allies have demanded that Prime Minister Hasina resign and make way for a neutral caretaker government to oversee polls.

Bangladesh further slipped on human rights this year as both the state and non-state actors associated with the regime denied people's basic rights and freedoms. \

Bangladesh’s image remains tarnished as the US government sanctioned the elite police unit, the Rapid Action Battalion (RAB), and top officials over dozens of alleged extrajudicial killings and enforced disappearances of mostly opposition leaders and supporters.

The sanctions slowed such killings but didn’t stop them. International rights groups — Human Rights Watch and Amnesty International — have called for prosecutions and justice, but to date, nothing has been forthcoming.

No safe haven for minorities

Bangladesh’s Constitution guarantees equal rights for all citizens, but this was not the reality this year. Both religious and ethnic minorities continued to suffer abuses, discrimination, and violence from the majority Bengali Muslim communities in 2022.

Hindus, the largest religious minority, endured dozens of attacks and tribal communities including, Christians, faced violence related mostly to land grab issues. This violence has been met with ignorance and impunity.

In May, the Catholic Bishops’ Conference of Bangladesh (CBCB) celebrated 50 years with a two-day national celebration.

While it was a glorious moment to look back at history and relish successes, strong calls were made for the effective empowerment of laypeople and women in Church bodies, which is still lacking.

Pope Francis appointed Father Emmanuel Kanon Rozario as the new bishop of Barishal diocese in June. The priest was appointed to the country’s youngest and smallest diocese which was without a bishop for about two years due to an internal dispute over possible candidates.

Bishop Rozario’s appointment was a pragmatic choice as he has an illustrious academic and pastoral track record. In the past three years, three dioceses — Chittagong, Sylhet, and Barishal — have got new leaders, and at least two out of the remaining five will likely have new bishops next year. Time will say whether new Church leaders are able to guide the faithful in a truly synodal spirit or continue with a clergy-centric Church.

The agency has been a pioneer in the development sector for decades, and in many places, Caritas presents the charitable social face of the Church.

Like other charities, Caritas also faces strict regulations and bureaucratic hassles as the government seeks to assert more control. With about 25 percent of Bangladesh’s population still below the poverty line, Caritas’ mission for socio-economic development for the marginalized is more important than ever.

Justice cries in the wilderness by Christians

Attacks against Christians in Bangladesh are rare. However, this year thugs vandalized religious statues in two Catholic Churches in the northern region and the capital Dhaka. There have been similar cases in the past, but justice remains elusive. In Muslim-majority Bangladesh, religion is a sensitive issue and any attack on Muslim worship places could trigger a communal riot. Such reactions are different in cases of minorities and impunity is the norm as attacks are passed off as fringe incidents.

In 2001, terrorists bombed a Catholic Church, leaving 10 Catholics dead. After 21 years police have failed to charge anyone and Christians have lost hope that justice will be served. This is extremely frustrating not only for the families of the victims but for the whole Christian community. Moreover, justice for the killings of Catholic leaders who stood for the rights of their communities is still in limbo.

It is fair to say, except for the rich, powerful, and ruling elites, the year 2022 is one that most Bangladeshis would like to forget. Unless there is a change of heart by the people in power, the tragic reality is the new year won’t bring any good news for the people.