A file image taken on July 1, 2017 of a Bangladeshi policeman guarding the old location of the Holey Artisan Bakery café a year after a deadly siege carried out by Islamist militants, in Dhaka. A Bangladeshi-German film based on the attack has been banned in Bangladesh. (Photo by AFP)

Bangladeshi authorities have banned a film about a deadly militant attack on a Dhaka café because it might incite religious sentiments and damage the Muslim-majority country's image abroad.

The Bangladesh Film Sensor Board denied a theatrical release of Bengali film Shonibar Bikel (Saturday Afternoon), which is based on the Holey Artisan Bakery café attack on July 1, 2016, that left 22 people dead.

"The board did not sanction permission for the movie's exhibition, both at home or abroad, as it would disrupt internal security and also tarnish the country's global image," the censor board's vice-chairman Nizamul Kabir said on Jan. 17, reported AFP.

The film's director Mostofa Sarwar Farooki told ucanews.com that he was surprised by the ban.

"Two days ago, the film received huge applause at the Censor Board, and out of the blue it has been banned," Farooki said.

"It is still hard to comprehend what changed their mind about the film. We have yet to receive an official letter about the ban, but I would say this is very frustrating.

"It is an unhealthy way of blocking freedom of expression."

Jahid Hasan, a Muslim actor who starred in the film, said he could not accept the idea the film might instigate religious fervor.

But he still hopes the Bangladeshi-German joint production will in time get a local screening. "I believe members of the Censor Board are prudent, and they will reconsider the decision to allow the release of the film," Hasan said.

Film banning is not uncommon in Bangladesh. In 2015, the country's censors banned a film based on the Rana Plaza garment factory collapse in 2013 that killed more than 1,100 workers. The board said the film would tarnish Bangladesh's image. 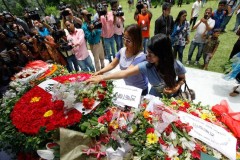 Long known as a moderate Muslim country, Bangladesh has seen an upsurge in Islamic militancy in recent times.

The attack on Holey Artisan café in the upscale Gulshan diplomatic area of Dhaka was the worst of all. Five Islamic militants brandishing bombs, knives and assault rifles attacked the café and held guests hostage.

The militants went on to hack 19 people to death, mostly foreigners. Militants also killed two policemen and the café's chef.

Bangladesh's military carried out a raid on the café and killed the militants.

In response to that attack and others, the ruling Awami League government launched a nationwide anti-militancy drive that left about 50 militants dead and dozens of leaders and members of militant outfits arrested and jailed.