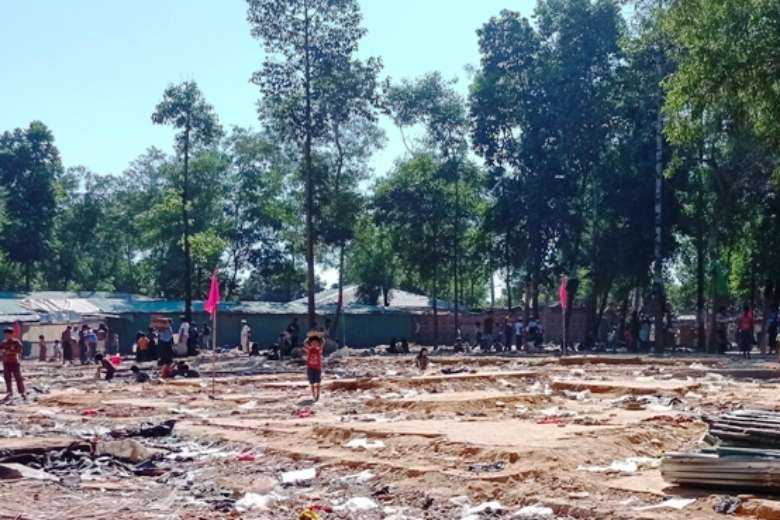 A Rohingya child carries a crate on his head at Kutupalong refugee camp after authorities demolished illegal structures made on government property in Ukhia on Dec. 10. (Photo by Tanbir Miraj/ AFP)

Bangladesh authorities demolished about 1,000 shops belonging to Rohingya in camps, an official said Dec. 10, with a rights worker saying the move would have a "huge impact" on refugees' livelihoods.

About 850,000 Rohingya are packed into 34 camps across the country, most of whom fled a 2017 military clampdown in neighbouring Myanmar that the United Nations says could be genocide.

Bangladesh has been praised for taking in the refugees but rights groups criticise the authorities for restrictions in the camps and their controversial relocation of thousands of Rohingya to a flood-prone island.

Bangladeshi camp officials armed with excavators, hammers and shovels bulldozed the shops in several camps in the Cox's Bazar area on Thursday and Friday, leaving shell-shocked Rohingya shop-owners scrambling to salvage their goods.

"We have evicted about a thousand illegal shops. We are evicting illegal shops to build shelters for Rohingya," he told AFP.

Hundreds of Rohingya gathered at the eviction sites as excavators tore through the bamboo and steel structures.

Some broke down in tears, while others panicked.

"They broke down my shop. That was my only means of livelihood. With its income, I could support a family of seven," said Al Amin, 30.

"Thousands of Rohingyas have been hit by this shop demolition drive," he told AFP.

"I don't know what to do now. What can I say? The Myanmar army has destroyed our fortunes. Now we lost our fortune once again."

"My family has to be fed," cosmetics trader Abdur Rashid, 24, said.

"My wife is pregnant. My parents are dependent on my income from this shop. Now I have lost everything."

One international rights group researcher who monitors the situation in the camps said authorities were demolishing the shops to pressure the Rohingya to agree to relocate to the controversial Bhashan Char island in the Bay of Bengal.

"Thousands of refugees were trying to eke out a living with these shops. It will cause huge impact on their livelihood," he said, speaking on condition of anonymity.

Bangladesh has so far relocated close to 19,000 Rohingya to Bhashan Char.