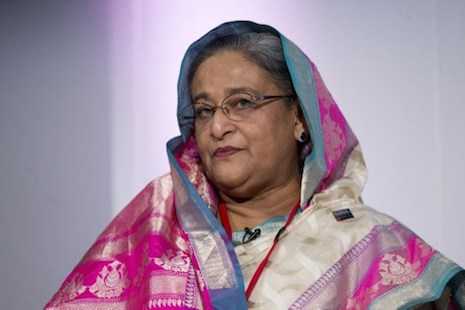 Having ridden out the uproar over her walkover re-election, Bangladesh's Prime Minister Sheikh Hasina is now attempting to silence any further dissent with the crucial backing of the military, say observers.

The United States was among a host of countries to demand new polls that "credibly express the will" of the people after Hasina's ruling Awami League romped to victory in a January ballot boycotted by the opposition.

But rather than reach out to critics, Hasina has been accused of since seeking to hound them through the courts, muzzle the media and neuter the judiciary to cement her rule.

"The government hastily ratified these laws and policies to consolidate power," Ataur Rahman, an expert on Bangladeshi politics from the State University of New York, told AFP.

"With a tamed media and judiciary, the government can easily continue to rule unchallenged for years and the opposition won't be able to mobilize people to destabilize the regime."

Few eyebrows were raised when opposition leader Khaleda Zia's attempts to prevent corruption allegations from coming to trial failed, as her enmity with Hasina dates back years. Her trial began last month.

But almost the entire leadership of Zia's Bangladesh Nationalist Party is now fighting multiple court cases, many over claims they were accessories to Molotov cocktail attacks that injured no one.

According to the Prothom Alo daily, police filed cases against 355,908 people for violence since the turn of the year while thousands more are on the run.

Accusations that judges took their orders from politicians were raised last year when a special government-appointed tribunal convicted a number of Islamists of war crimes dating back to the 1971 liberation conflict.

The Supreme Court has generally been seen as independent, its judgments embarrassing military and civilian governments alike over the years.

In August the government also rolled out new regulations for broadcasters, including a ban on speech deemed "anti-state".

Mahmudur Rahman Manna, a popular television host until his recent sacking, says he lost his job due to government pressure.

"The management told me the show was becoming very critical of the government and they were dropping me because of pressure from the government," Manna, who worked for the private Channel 24, told AFP.

Brad Adams of Human Rights Watch said the government was imposing "draconian restrictions" on the media to allow it "to take arbitrary action against those it sees as its political opponents".

"This policy exemplifies how little appreciation the government has for free speech," said Adams, the New York-based group's Asia director.

Officials say such criticism is unfair and deny democracy is being undermined.

"It is absolutely not true that the government is trying to cement its power by introducing the new laws," Iqbal Sobhan Chowdhury, the prime minister's media adviser, told AFP.

"Rather the legislation empowering the parliament to impeach the judges and the media policy are to make these institutions more democratic."

Insisting there was no government pressure to sack Mana, Information Secretary Martuza Ahmed said broadcasters and newspapers would continue to "enjoy full freedom" as enshrined in the constitution.

Chowdhury said the legislation on sacking judges was in Bangladesh's original constitution which was repealed after a 1975 coup.

"We have just restored that provision to strengthen democracy," he said.

The military has a long history of intervening in politics and the former territory of East Pakistan has seen more than a dozen coups since its bloody war of secession from Islamabad in 1971.

As the widow of general-turned-president Ziaur Rahman, Zia was once seen as a natural ally of the army.

In contrast, Hasina's father Sheikh Mujibur Rahman -- Bangladesh's founding leader -- was assassinated in a coup less than four years after independence. She faced down a mutiny weeks after she took power in 2009.

But relations have improved markedly and the military stood firm with the government when protests leading up to January's polls turned violent.

While there were suspicions that recent anti-government protests led by Imran Khan in Pakistan had the army's tacit support, analysts say Hasina has no need to watch her back.

"For the first time, the military is absolutely under the grip of Hasina," said Rahman.

And diplomats who raised questions about the legitimacy of the polls back in January have tempered their language.