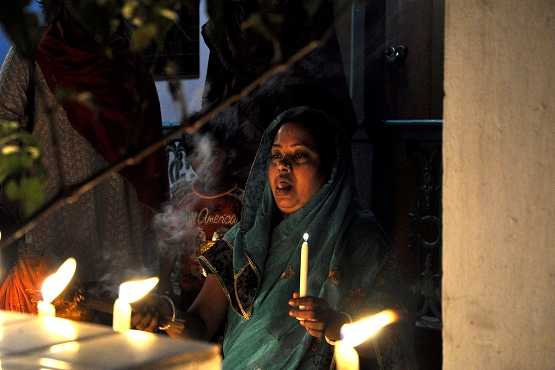 A Hindu woman prays at a temple in Dhaka in this file photo. A steep rise in violence is making Muslim-majority Bangladesh a dangerous place for religious and ethnic minorities. (ucanews.com photo)

Two months into 2017 and there has been no major violence against minority communities reported in Bangladesh. As Milton said, "Morning shows the day," if that is so then minorities may live in relative peace and good fortune in this Muslim-majority country.

Dozens of places of worship were destroyed along with homes and businesses belonging to minority communities. It is a jaw-dropping fivefold increase on 2015, according to a report from the Bangladeshi Hindu Buddhist Christian Unity Council, the country's largest minority forum.

This is a saddening development in a land that prides itself on thousands of years of religious and ethnic pluralism.

Homegrown and transnational Islamic militant outfits carried out some of the attacks and killings. Although these groups are small, they are strong and well connected.

They consider minorities an obstacle to the Islamization of the country. They are not only after minorities but also liberal and secular Muslims who stand against their fundamentalism.

However, most of the attacks were not driven by sectarianism or religious hatred but motivated by the greed and ambition of a small but influential group of opportunists who spared no chance to pound minorities.

And the most worrying fact is that a steep rise in violence against minorities occurred during the tenure of the ruling Awami League party, which is avowedly secular and enjoys the broad support of minorities nationwide. So, the party considered last frontier of hope for minorities in the country has continuously failed to protect them.

Minorities also suffer from a lack of support from government officials and ruling party officials, leading to a sense of alienation. Although police make token arrests, the local administration is usually slow to assist the beleaguered community and justice is rarely meted out.

In many cases, ruling party activists were complicit in the violence.

On Oct. 30, 2016, dozens of Hindu temples and houses were attacked and vandalized in Nasirnagar in Brahmanbaria district following allegations that a local Hindu man posted an image on Facebook that defamed Islam. Although Rasraj Das, the Hindu fisherman accused of posting the image, was arrested and sent to jail, Islamic hard-line groups organized a rally and attacked Hindu properties.

When the hard-liners came out to protest the blasphemous image, the Awami League politicians further instigated them because they wanted to annex Hindu properties. Within a couple of days of the first attack, there was another wave of violence against Hindus and the blame fell again on local members of Awami League.

About a week later, on Nov. 6, the largely Christian indigenous Santal community came under attack by dozens of thugs sent by a local sugar mill to evict them from ancestral lands in Govindaganj in northern Gaibandha district. Four Santal men were killed and dozens were injured. A local Awami League parliamentarian and party members were accused of collaborating with the mill authority to evict the Santals because they wanted to lease out their lands.

Hindus have suffered much since the British rule of India. The British promoted a divide and rule policy, instigating Hindu-Muslim tensions in a series of deadly communal riots. The ensuing bloodbath led to 1947 partition of India and Pakistan.

In the Islamic State of Pakistan, anti-India sentiments fueled the persecution of Hindus which included a law that branded Hindus "enemies of the state" and confiscated their properties. This discriminatory and abusive law existed in Bangladesh until 2001, years after gaining independence from Pakistan in 1971. Years after the law was repealed, Hindus are still struggling to get their properties back.

Longstanding disputes over properties led to scores of attacks on Hindu communities including eviction, killings, injuries and rape, forcing the community to migrate to India en masse. In 1947, Hindus accounted for 30 percent of Bangladesh's population and in 1971, they made up just 23 percent.

Today, they have dwindled to some 9 percent. Much of the population shrinkage can be attributed to large-scale migration caused by abuse at the hands of the politically, economically and numerically dominant Muslims.

After the 2001 national election, the center-right Bangladesh Nationalist Party and its Islamist ally, Jamaat-e-Islami, came to power and unleashed deadly violence against minorities, especially Hindus, for voting in favor of the Awami League. Dozens of Hindu men were killed, Hindu women were raped and their houses, temples and businesses were attacked and vandalized.

After returning to power in 2009, the Awami League formed a judicial commission to probe the violence but the report was never made public and its recommendations were not implemented. Except for one high-profile gang rape case no other cases have seen justice so far, despite the Awami League being in power ever since.

Buddhists have endured less violence but have not been completely spared. In the Chittagong Hill Tracts, where largely Buddhist hill tribes have lived peacefully for centuries, sectarian tensions and violence perpetrated by settler Muslims and their political administration, is common.

In 1947, tribal people used to make up 97 percent of the population on the hills. But after years of state-sponsored Muslim settlements they make up a mere 50 percent.

A major anti-Buddhist riot took place in Cox's Bazar district in September, 2012, over a derogatory image posted on Facebook allegedly by a local Buddhist youth. Islamic hard-liners, in collaboration with politicians, including Awami League activists, rampaged through the Buddhist community, leaving 19 temples and over 100 houses destroyed.

The violence gained international media coverage and sparked an outcry, dozens were arrested but justice has yet to be delivered. Media investigations later found the image was doctored and posted from a fake profile.

Christians, including those from tribal backgrounds, have also been the victims of violence, largely over property issues. In recent times, Islamic militants have attacked Christian clergy and laypeople and issued death threats. Police provided protection for churches but cases of violence have not seen justice yet.

In 1998, during the tenure of the Awami League government, Muslim mobs attacked several churches and church-run institutes in old parts of Dhaka over a property dispute. In 2001, Islamic militants bombed a Catholic Church in Gopalganj district, leaving 10 churchgoers dead and scores injured. Christians have cried out for justice but nothing happened. The Catholic Church was forced to leave the disputed property, while the bombing case is in legal limbo.

The Bangladesh Constitution and other laws and policies offer nominal protection to minorities and the government is generally respectful to them. Bangladesh constitutionally recognizes Islam as the state religion but also reaffirms the nation is a secular state that "shall ensure equal status and equal rights to the practices of Hindu, Buddhist, Christian and other religions."

But these protections are often useless as the authorities are reluctant to assist in cases of violence against minorities and instead side with their tormentors for material and political gain. So there is a gaping hole in the system that bars minorities from seeking redress for their woes.

To tackle such an inferior and vulnerable situation, minority leaders have called for various protective measures to be implemented. They include a law to protect minorities, a new government ministry for minority affairs, a special commission to resolve land and property disputes, transferring cases of violence against minorities to a fast-track court, and at least 50 reserved seats in parliament.

If an extremism-plagued conservative Islamic state like Pakistan can have a minority ministry, minority protection laws and reserved seats for minorities, why cannot the so-called secular state of Bangladesh do the same?

These considerations are vital if Bangladesh wants to create a haven for minorities and help them live in peace. In the absence of these measures, minorities in Bangladesh will continue to suffer and struggle to survive.