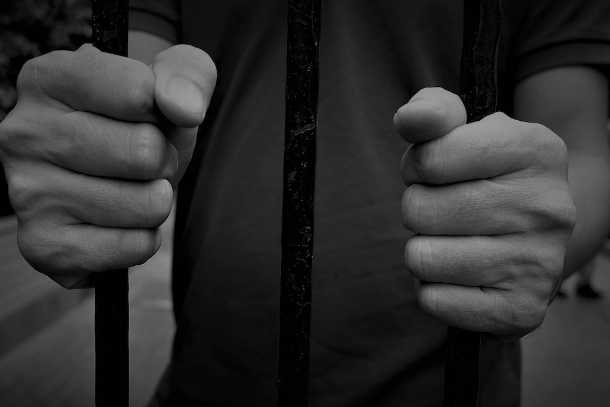 Two Pakistani brothers have to share a cell the size of a large living room with 100 other men in Bangkok's Immigration Detention Center. (Photo by Tibor Krausz/ucanews.com)

"I had fevers and a bad cough the whole time I was there," recalls Iqbal (not his real name), a civil engineer in his early 30s who speaks fluent English.

A Pakistani Catholic asylum seeker who fled his Muslim-majority homeland with his two brothers in fear of his life, Iqbal spent nine months at the prison-like facility where many visa overstayers end up after they are arrested by Thai authorities.

He and one of his brothers, a fellow asylum seeker, were on their way to an English class one afternoon in the eastern part of the Thai capital when they were stopped by police on a street during a random check. By then they had long been overstaying their tourist visas.

"I felt we didn't do anything wrong, but we were arrested and handcuffed like criminals," he says.

The brothers had arrived in Thailand after receiving death threats in their hometown of Karachi for printing Christian Bibles with cartoonish drawings of Biblical patriarchs. The illustrations aroused the ire of some Muslim men who began accusing the Christians of blaspheming against Islam by portraying Israelite patriarchs and prophets such as Abraham and Moses, who are also venerated in Islam, as crude caricatures.

"It's crazy. They accused us of working for Israel and America. They said we were trying to make Islam look bad," Iqbal recalls. "One day they attacked us violently, but we managed to escape."

In Thailand, which isn't a signatory to the United Nations' 1951 Convention on Refugees, Pakistani Christians and other asylum seekers are rarely granted refugee status. Even if they are waiting to be resettled to a third country, most asylum seekers who do not have valid visas are deemed to be illegal migrants.

Shortly after their arrest, Iqbal and his brother were taken to Bangkok's notorious Immigration Detention Center (IDC), which is one of 22 such holding facilities in Thailand for people caught staying illegally in the country.

The brothers found themselves among some 100 other men squeezed into a cell the size of a large living room. Their squalid, overcrowded quarters had only two squat toilets and a large tub-like basin from which detainees splashed water on themselves with plastic pails if they wanted to bathe. There was no privacy.

Along with a motley assortment of Hindus, Christians and Muslims from Pakistan, India, Bangladesh and Sri Lanka who also inhabited their cell, the two brothers would spend almost all their time cooped up inside, with only two hours allowed for outdoors activities in the yard twice a week.

Boredom and dejection often take their toll in the IDC. With nothing to do, detainees while away their time watching videos on a television set or playing cards. "Time passes very slowly in there," Iqbal says. "You wake up, eat, sleep, wake up, eat, sleep."

For years, human rights groups have been decrying the conditions at the IDC, but little progress has been made by Thai authorities in improving matters for detainees. Immigration officials cite a chronic shortage of funds and the large number of illegal migrants in Thailand as the reasons.

"I would describe the conditions at the IDC as degrading, unclean and overcrowded," says a foreign rights advocate who works with asylum seekers and regularly visits the detention center.

At present, according to the Jesuit Refugee Service, 35 Pakistani Christian men languish at the IDC. There are also almost as many women and a dozen children, too.

"Every year, Thailand arbitrarily detains thousands of children, from infants and toddlers and older, in squalid immigration facilities and police lock-ups," Human Rights Watch observed in a report.

"Around 100 children — primarily from countries that do not border Thailand — may be held for months or years. Thousands more children — from Thailand's neighboring countries — spend less time in this abusive system because Thailand summarily deports them and their families to their home countries relatively quickly."

Mothers and their young children are routinely detained together, locked up in small cells with scores of other women and children. Although there is a poorly equipped daycare center at the IDC, children have only sporadic access to it.

Lacking a chance to play or study much, the youngsters spend most of their time in joyless surroundings in the company of numerous adults in crowded, unhygienic conditions. Many of them are permanently sickly, suffering from a variety of ailments. Pakistani refugees are released on bail following their detention at the Immigration Detention Centre in Bangkok in this 2017 file photo. (Photo by Nicolas Asfouri/AFP)

In most cells there is little room to spare. If detainees move a muscle, the chances are they will rub up against someone by accident. They bed down for the night by lying in tightly packed rows on the stone floor or thin blankets laid on it.

Diseases like tuberculosis and scabies are rampant, passing from person to person inside poorly ventilated cells with permanently clammy air stirred only by wall-mounted fans.

His brother, a few years his senior, had it even worse. "He was having a lot of health problems," Iqbal says. "He has a dust allergy and developed a bad sinus infection. His health was up and down all the time."

Yet medical care within the facility is sorely wanting. "They give you an aspirin for everything," one former detainee says.

An elderly Pakistani Christian man recently died from existing health problems after he could not get proper medication inside the detention center.

The food isn't much to write home about. The same dish of rice with cucumber soup or bamboo shoots is served unvaryingly three times a day for breakfast, lunch and dinner. "We just mostly threw it out," the former detainee says.

Most detainees buy their own food from outside with money sent by friends or relatives.

Yet officials do not always make such exchanges easy. "The restrictive access system applied to the wider community involved in the provision of assistance appears harsh and punitive," the Bangkok-based rights advocate says. "[That] seems counterproductive when it's evident the Thai immigration bureau lacks basic resources to hold these people."

Detainees are mostly left to their own devices in their cells. "If you behave yourself, the immigration officers are really nice to you," says Iqbal, who is now free but has to report back to the center regularly as he awaits his chance to be resettled to a third country such as Canada or Australia. "At Christmas they brought us cakes. Not a single officer ever raised his voice or laid a finger on me."

Some of his fellow detainees were less amiable. Periodically, pent-up frustration erupts into fights among detainees during quarrels over food or space. "It was a nightmare," Iqbal says. "I could barely wait to get out."

Get out he and his brother eventually did after a Catholic charity posted bail for them.

Many other detainees have not been so lucky. "I met some people who had been there for eight, nine or 10 years. The IDC has become their home in a way," Iqbal says.

Ironically, despite the dismal conditions, some detainees would rather stay there than risk being repatriated. They include people who fear being imprisoned or murdered if they were deported back to their homelands.

Earlier this month a Chinese political dissident, Wu Yuhua, began a hunger strike in protest at what she saw as an attempt by a Thai court to repatriate her and her husband, Yang Chong, to China. The couple were detained in Bangkok in late August despite being recognized as genuine refugees by the United Nations High Commissioner for Refugees.

Before they fled from China in February 2015, the couple participated in pro-free speech demonstrations in the southern Chinese city of Guangzhou. They also launched an online support group for Gao Zhisheng, an outspoken lawyer who has been repeatedly harassed, tortured and secreted away to unknown locations by Chinese authorities for documenting human rights abuses against political dissidents and religious minorities.

"I am an innocent refugee," Wu stressed in a video she recorded inside the IDC to explain her decision to go on a hunger strike. "There is no [other] way to resist [our detention]. No dignity."