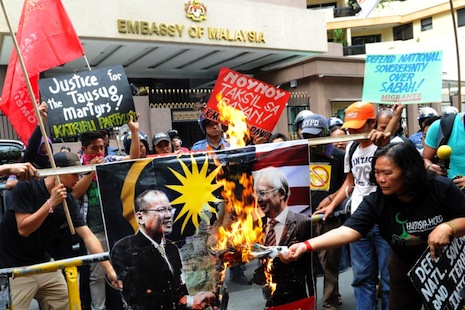 Protesters outside the Malaysian embassy in Manila. President Aquino's handling of the crisis has been criticized from several quarters (Photo: AFP)

A statement attributed to Ban said he "expresses concern about the impact this situation may have on the civilian population, including migrants in the region," adding that the secretary general is "closely following" the situation.

In his first public statement on the crisis, the UN chief called on all parties to allow delivery of humanitarian aid and to "act in full respect of international human rights norms and standards."

In Manila, a tearful sultan ordered his followers in Sabah to maintain a "defensive position" as he declared a "unilateral ceasefire" after learning of the UN statement.

“We hope that Malaysia reciprocates the … call for a ceasefire,” said Abraham Idjirani, spokesman for the Sultanate of Sulu.

The sultan’s remaining supporters will remain in the area around Lahad Datu, scene of the standoff which ended on Monday, pending further “coordination” from the UN, he added.

On Thursday, Idjirani reported that 10 of the Sultan’s followers had been killed so far, with 10 arrested and four wounded out of an original group of about 200 people.

Reports that the sultan's supporters ambushed, killed and mutilated policemen has caused uproar in Malaysia and prompted Philippines Foreign Secretary Albert Del Rosario to refer to “terroristic acts” by the group which in turn has prompted an angry response.

For the second time this week, Malaysian fighter jets flew over the Felda Sahabat area in Sabah on Thursday where Kiram's followers were believed to be holed up.

News reports from Malaysia said security forces maintained a "strong presence" around the area to prevent the entry of food and reinforcements for the sultan's men.

A faction of the Moro National Liberation Front (MNLF) – a ceasefire group which retains arms and men in areas within the Sulu Sultanate – on Wednesday claimed to have managed to penetrate a Malaysia-Philippines naval cordon in the Sulu Sea to reinforce the sultan’s forces.

"Many have slipped through the security forces. They know the area like the back of their hand because they trained there in the past," said Muhajab Hashim, chairman of the MNLF’s Islamic Command Council.

Hashim did not say how many MNLF fighters had landed in Sabah but said "thousands" had earlier expressed interest in joining.

There are reports that both the MNLF and the sultan feel they were sidelined in the peace negotiations peace deal on Mindanao, which saw the Moro Islamic Liberation Front negotiate final details with the government.

Meanwhile, rights group Karapatan added its voice to a growing tide of criticism at the government over its handling of the Sabah issue.

In a statement, it called the government’s failure to represent the interests of Filipino Muslims "insensitive and reckless, and therefore unforgivable.”