A Penjor, a tall, curved bamboo pole decorated with coconut leaves is seamlessly adopted by the Catholic Church 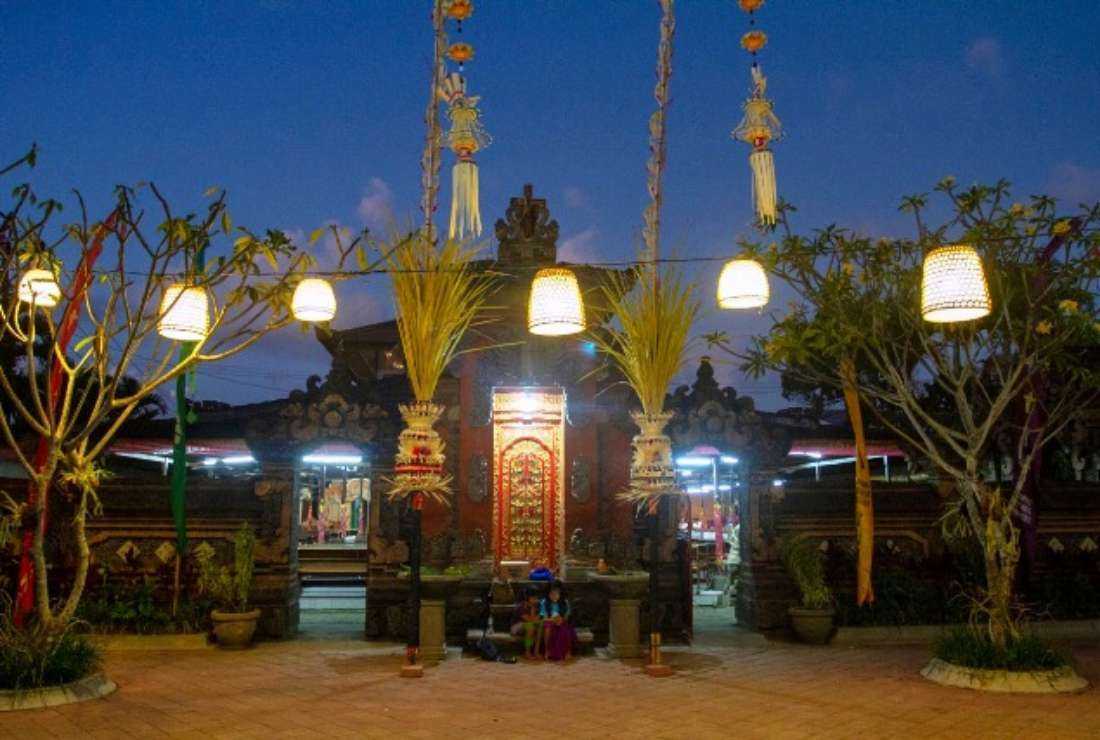 Every time he welcomes Christmas, Yohanes Wayan Puniaste puts up a penjor, a Balinese ornament made of curved bamboo sticks decorated with various knick-knacks, in front of his house.

“We usually put it up on Dec. 24 mornings. It is obligatory along with the banners to brighten up Christmas,” he told UCA News.

The 64-year-old man said his parents, who were first-generation Catholics at the Sacred Heart Church in Palasari Parish, started the practice rather than adopting the Christmas tree from the West.

The parish area, 150 kilometers from Denpasar, the Bali province capital, is 99 percent Catholic.

“Every house here will put up a penjor. This is how we Balinese celebrate Christmas,” Puniaste said.

The penjors gracefully line roads near parishioners’ houses and churches.

Father Alfonsius Kolo, parish priest of St. Silvester Pecatu Church in Denpasar, says though the parish is heterogeneous they do use penjors “as a decoration inside the church.”

Penjor is a Balinese cultural heritage rooted in Hinduism, a religion followed by 86.8 percent of Bali's 4.27 million people.

Apart from being displayed on Galungan — the quintessential Balinese Hindu traditional ceremony celebrated every 210 days — penjor arches, also line the streets of the city of Bali for major events like the G-20 summit last month.

I Gusti Ngurah Bagus Kumara, a parishioner in Tuka who studies inculturation in the Catholic Church of Bali, says the penjor in its original form is made of a single piece of bamboo with various ornaments representing the Hindu mythological dragons, Naga Bang Basuki and Naga Ananta Boga.

Their Hindu ancestors always put up penjor on pânampahan, the day before Galungan, Kumara said.

So even after embracing Catholicism, they did not abandon it, but “adapted this noble teaching in their life of faith, of course with several adjustments,” he added.

He said penjors still have the same meaning and structure as those practiced by Hindus, "but [for Catholics] are no longer the representations of a dragon.”

Hence, Kumara said, what Catholics put up was not a penjor, but a pepenjoran (something similar to a penjor).

It is more of a decorative piece like in front of a hotel, a shop or a government building, but Balinese Catholics still maintain the noble value in the penjor, he added.

Catholics number over 35,000 people and are mostly concentrated in Denpasar diocese, whose territory also includes West Nusa Tenggara province. Many among them are immigrants from other areas, such as Flores and Java.

The Catholic mission in the diocese officially began in 1935 and two native young men — I Wayan Diboleg and I Made Bronong — from Tuka hamlet, about 15 kilometers from Denpasar, became the first Catholics in May 1936.

Hence, Tuka is regarded as the birthplace of Catholicism and is popularly known as the Bethlehem of Bali.

Kumara said that since the beginning, the Catholic Church has always tried to maintain the uniqueness of Bali in the spirit of the Second Vatican Council.

He said, at the inauguration of the first Catholic Church in Tuka on Feb. 14, 1937, Balinese Catholics proudly wore Balinese traditional clothing and put up the pepénjoran in front of the church.

"According to existing records, there was even an entertainment program for three days and three nights with various Balinese art events staged by artists who believed in Hinduism," he said.

This, Kumara said, is because Catholic teachings through the Second Vatican Council clearly said that "we are obliged to believe in Christ in the positive tradition that we have."

“And, we Balinese, cannot separate ourselves from that cultural bond. The Catholic Church is very aware of this and has tried to maintain Balinese culture in the Church," he said.

He said, as an active actor in inculturation in Bali, he felt the importance of the role of the Catholic Church in maintaining the cultural heritage of their ancestors.

He said inculturation was evident even in the places of worship with various Catholic symbols carved in a distinctive Balinese style as also in liturgy, which incorporated Balinese traditional music and language.

“Being part of the Catholic community does not mean we have to follow the traditions of Europe or Flores or other nations. Catholic means universal or general. We are still Balinese, even though we don't believe in Hinduism. The noble values that we inherited from our ancestors are able to strengthen the foundation of the Catholic faith,” Kumara said.

Back in Palasari Parish, Puniaste said he hoped to continue his ancestral practices and the penjor was just one of them.

The other practices like arengejot or sharing food with neighbors during festivals, and wearing Balinese traditional clothes like kamen (sarong) and udeng (headband) while attending Mass are what he cherishes during Christmas and Easter.

“I would love to pass on these practices to my children. And thank God they are already picking them up,” said the father of two.