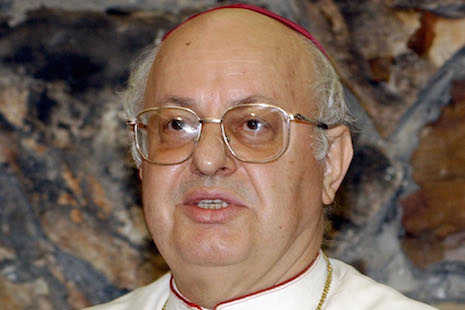 Last week, the debate about next October’s Synod on the Family came into view once again as the Secretary General of the Synod, Cardinal Lorenzo Baldisseri, opened a three-day (January 22-25) international conference of lay and family movements in Rome.

Cardinal Baldisseri called the 300 conference participants, representing 80 different organizations, to enter into the synod process by reflecting on the preparatory document, called the Lineamenta. The document contains the final report from last October’s preparatory assembly (the Extraordinary Synod of 2014), together with 46 questions intended to facilitate its reception and examine the themes treated in it.

The Secretary General of the Synod called participants to consider carefully how devoted Catholic families can help those who are not living the “fullness of Christian marriage.” The mission of the organizations assembled, he suggested, could be deepened by evangelization efforts to those in irregular marital situations. Caring for wounded families, he said, demands a search for courageous pastoral choices.

Following his presentation, Cardinal Baldisseri fielded questions. The first came from a representative from a Venezuelan-based family organization, who wished to remain anonymous. The representative’s question was more of a statement.

Cardinal Baldisseri responded by saying, “We shouldn’t be shocked that there is a different position from the ‘common doctrine.’”

He cited the example of the many contrasting positions that were in evidence at Vatican II.  “Therefore, there’s no reason to be scandalized that there is a cardinal or a theologian saying something that’s different than the so-called ‘common doctrine.’ This doesn’t imply a going against. It means reflecting. Because dogma has its own evolution; that is a development, not a change.”

The cardinal added that it is “right that there is a reaction” and that “this is exactly what we want today. We want to discuss things, but not in order to call things into doubt, but rather to view it in a new context, and with a new awareness. Otherwise, what’s theology doing but repeating what was said in the last century, or 20 centuries ago?”

Theology, he said, “is meant to be investigated” and therefore “we shouldn’t be concerned.”

Referring to Pope Francis’ closing address at last October’s Synod, Baldisseri told participants that the Holy Father used a “beautiful expression” when he said, “I would have been amazed if it were not for these interventions and animated discussions. Indeed, discussions are welcome.”

The Cardinal added: “Otherwise, we’d just be here repeating ourselves” and falling into what, in the same address, the Pope called a “false quietism and a false peace.”

The Cardinal then reminded the participants that at Nicaea the Council Fathers even came to blows.

After his opening presentation and the question and answer period, Aleteia asked Cardinal Baldisseri if he might explain further his views on the development of doctrine. What historical examples would he point to?

“A priest who left the priesthood in the 1920s,” he said, “was sanctioned, excommunicated, and was to be avoided. He wasn’t even to be greeted on the street. That was such a severe sanction. And then we came to the point when they removed the sanction, and he was treated as an ordinary civilian. However, he was still considered a priest. If he were in a relationship with a woman, she was considered a concubine. Then we came to a point that had never been reached before. Ecclesiastical celibacy remained, but it could be dispensed. The Pope could dispense it, saying, ‘He cannot act as a priest, he is dispensed, and he can act an ordinary person.’” Dispensed priests are now able to marry.

In the same way he pointed out that the 1917 Code of Canon Law considered two people living together to be public sinners who should be shunned.  “Then at a certain point, we said: No, these people are in a situation, but they shouldn’t be avoided.  In fact, they should come to Church and participate. They cannot participate in the Eucharist, but we made a step forward.”

Cardinal Baldisseri also expressed his opinion that the experience of the Eastern Orthodox, who allow for a blessing of second marriages, should be further investigated.

Finally, he pointed to difficult marital situations. “What do we do with these people? We can’t remain with the status quo…If they have children to look after, or elderly parents from the second marriage that need help, what do they do? Is someone to be left alone, because a husband or wife took another road?”

He then observed: “The only Sacrament that requires two people to receive it is marriage. And [in some divorces] there’s the victim, who isn’t guilty. Perhaps the husband ran off with his secretary. Today [the wife] has to take on all the consequences. Today, we are more sensitive to these things.”

Cardinal Baldisseri drew out a general principle from these points, arguing that while the essential cannot be modified, discipline can be.

Aleteia then asked him about the process by which the various documents that have been issued to date in regard to the Synod on the Family have been vetted.

Why did the final Relatio published in the Lineamenta include the paragraphs on homosexuality, extra-marital cohabitation and Communion for the divorced-and-remarried  that failed to gain the approval of the Synod Fathers in October.  (Paragraphs 52,53,55 in the Italian; the English has a slightly different numbering system.)

“It was the Pope’s decision to include the points that did not receive the two-thirds majority,” Cardinal Baldisseri responded. “The Pope said: ‘These three points received an absolute majority. They were therefore not rejected with a ‘no,’ as they received more than 50 percent approval. They are therefore issues that still need to be developed. We as a Church want a consensus. These texts can be modified, that’s clear. Once there has been further reflection, they can be modified.”

The Cardinal also informed us that the 46 questions published in the Lineamenta were the work of both the General Secretariat and the 15 members of the Council of the Secretariat. Responses are due April 15th.

Asked if the Pope had reviewed the questions before they were published, the Cardinal replied: “The documents were all seen and approved by the Pope, with the approval of his presence. Even the documents during the [Extraordinary] Synod, such as the Relatio ante disceptatationem [the preliminary report], the Relatio post disceptationem [interim report], and the Relatio synodi [final report] were seen by him before they were published.”

He added, wryly: “This point is important not only because of his authority, but also it puts the Secretary General at ease.”