Delhi High Court has granted bail to three student activists who were jailed for allegedly instigating riots in February 2020 amid a protest against India's Citizenship Amendment Act (CAA).

The violence that started on Feb. 23 in several areas of northeast Delhi left 53 people dead and over 200 injured in the deadliest violence in the capital in more than three decades.

While granting bail to the students on June 15, the court reprimanded Delhi police for “casually” invoking provisions of anti-terror laws against protesters.

“Finally, our courts seem to have woken up to the fact that the people in administration whose job is to protect the constitutional rights of its citizens are in fact indulging in acts of suppression against citizens’ right to dissent by framing charges under special laws that are meant for hardcore terrorists,” Christian lay leader A.C. Michael told UCA News.

“It is common knowledge that every politician, including the likes of Prime Minister Narendra Modi and Home Minister Amit Shah, have actively organized and participated in sit-in protests and processions, and have instigated many others to do so against the authorities to prove their point. Obviously, these can’t be termed acts of terrorism.

“The university students, who are future leaders of our country, certainly have the right to protest against laws like the CAA which deny citizenship based on faith. As a matter of fact, the whole world has termed it as against human rights values that are enshrined in our constitution.”

In their judgment, Delhi High Court justices Siddharth Mridul and Anup J. Bhambhani said the foundations of the country stood on surer footing than those likely to be shaken by a protest, however vicious, organized by college students who operated from the confines of a university.

“The allegations against the student leaders do not show that they committed any crime under the Unlawful Activities Prevention Act [UAPA],” they said.

The court held that “the right to protest is not outlawed and cannot be termed as a ‘terrorist act’ within the meaning of the UAPA.” 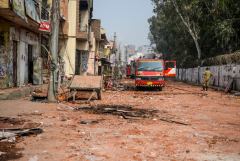 “We are constrained to express that it seems in its anxiety to suppress dissent, in the mind of the state, the line between the constitutionally guaranteed right to protest and terrorist activity seems to be getting somewhat blurred,” the judges said.

“If this mindset gains traction, it would be a sad day for democracy."

“It is indeed good news. This will certainly give a ray of hope to several people who are working towards justice and raising their voices for voiceless people,” he said.

“There is a trend in the country that anyone who questions the federal government, which is the right of any citizen of this country, is treated as anti-national or a Naxal.

“Verdicts like this will encourage people who are working to safeguard the secularism of this country.”

Violence broke out in Delhi in February 2020 after groups favoring the CAA clashed with groups opposing it.

The CAA, passed in December 2019, aims to grant Indian citizenship to persecuted minorities from Muslim-majority Pakistan, Bangladesh and Afghanistan while blocking naturalization for Muslims.

Muslims see their exclusion from a law that makes religion the basis of citizenship as yet another attempt by the Narendra Modi government to marginalize them.

Coupled with a proposed nationwide National Register of Citizens, the community fears the moves are intended to strip millions of Indian Muslims of their citizenship.