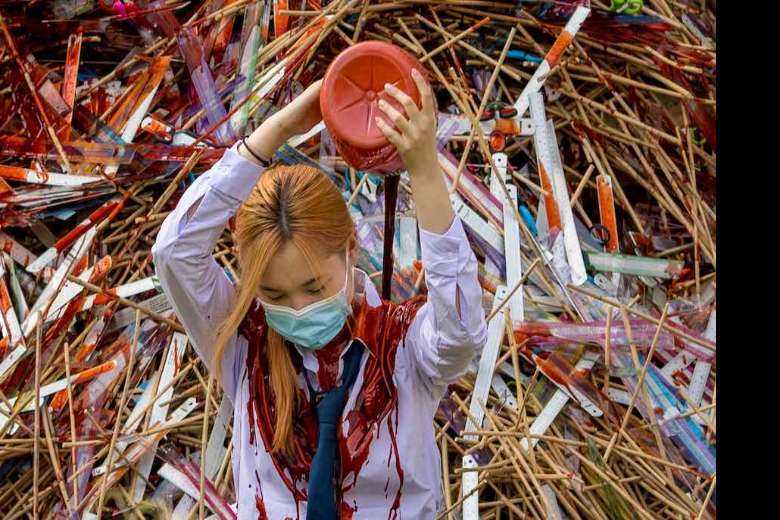 A protester pours red paint on herself in front of a heap of stationery and bamboo canes during a "Bad Student" demonstration outside the Ministry of Education in Bangkok on January 16, 2021, on the occasion of Teachers' Day in Thailand. (Photo: Jack Taylor/AFP)

A teenage female volunteer dressed in her high school uniform allowed herself to be tied up while standing on a chair in a pile of books.

She was then doused in red paint, her pristine white shirt becoming badly smudged in the process, while she was being presented as a witch about to be burned. Other student volunteers then proceeded to set fire to some books arranged around the teenage girl in a circle.

This evocative piece of performance art recalling the burning of witches in medieval Europe was staged one evening at Bangkok’s Democracy Monument by members of the sarcastically named Bad Student activist group last weekend.

The apparent aim of the Thai students’ performance was to present dissenters as a persecuted minority in the country’s school system, which young activists want to see reformed.

“We don’t want this rotten education system,” a Bad Student activist declared through a loudspeaker.

“This rotten education system doesn’t meet our needs [and] doesn’t improve students’ potentials,” he stressed. “We want our future back.”

Teenagers of high-school age have been taking to the streets of Bangkok regularly for over a year in order to demand a reform of Thailand’s education system, which they view as ossified, authoritarian and ineffective. After a months-long lull in protests during the height of a raging outbreak of Covid-19 in the summer, groups of high-school students have retaken to the streets in response to a decision by the Ministry of Education to resume classes online as of September.

“The fact that students are having to keep putting up with this [state of affairs] is like setting a fire,” one demonstrator explained, a tone of indignation creeping into his voice.

According to the protesters, 1.8 million students have been forced to drop out of the school system over the years for a variety of reasons, including a repressive environment, ineffectual teaching and outdated practices. Youngsters from economically deprived backgrounds are especially disadvantaged in the country’s school system where education is nominally free but can impose various costs on students and their parents.

Bad Student activists have been demanding changes in schools, not least to rules that they regard as stifling young people’s creativity and individuality. These include the compulsory use of identikit school uniforms and prescribed hairstyles for both girls and boys in government-run institutions.

“We are expected to look the same and behave the same,” one teenager who attends a prestigious high school in Bangkok told UCA News.

“It’s like the system is only interested in enforcing uniformity and not in letting students be themselves,” she added.

Young activists have also taken aim at school curricula that they say are outdated and too heavily focused on rote learning.

“The homework that we do every day, the workload that we have every day, the tests that we take every semester — what is the point of them?” a student activist pondered during a recent rally.

In addition to staging street rallies, Bad Student activists have announced they would boycott online courses mandated by the Ministry of Education.

Thailand’s government-run education system has long been seen as highly ineffective by experts and observers alike. Thai students tend to score badly on international tests when it comes to basic skills, including literacy and English proficiency.

In 2018, in the most recent PISA examinations, which take place every three years and evaluate education systems worldwide, Thai students were found to perform well below the international average in such core subjects as reading, mathematics and science.

Thai students ranked at 56th place for math, 66th place for reading, and 52nd place for sciences. In reading, for instance, they recorded an average score of 393 points, which was far below the international average of 487 points.

Yet it isn’t the students who are to blame for such poor showings in international tests, many observers say. It’s the country’s educational system that is at fault, they say.

“Plagued by inadequate funding, huge class sizes (more than 55 students to a class is normal), terrible teacher training, students that seem to have little motivation and a system that forces teachers to pass students even though they have actually failed – there doesn’t seem to be much hope that education in Thailand will improve any time soon,” an anonymous foreigner taught for a decade in Thai schools wrote in a recent expose of the situation pertaining at many schools.

“Rules change every semester, new guidelines are handed down to teachers regarding course content, lesson plans, testing at the beginning of each new semester, then change again the following one,” the teacher explained.

“Thai students are not taught to think for themselves, so [they] have few critical thinking skills,” the teacher added. “Books are limited, science equipment doesn’t exist in a lot of schools, and western teachers in government schools are often unqualified and have no interest in teaching their students anything.”