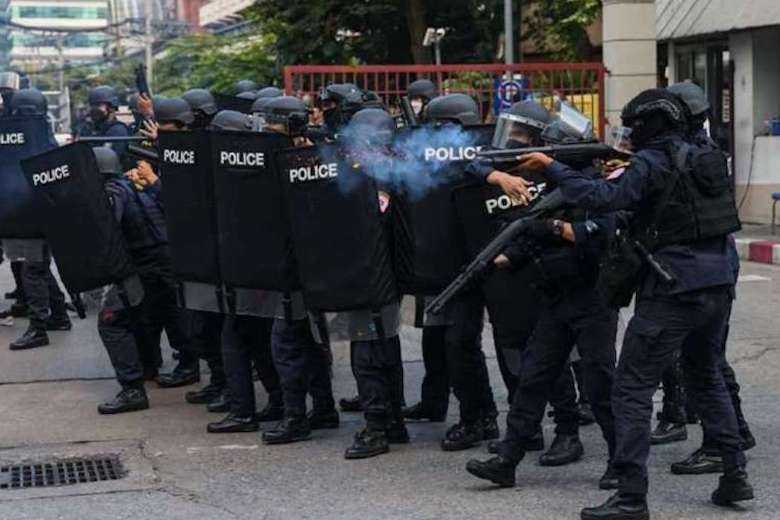 A police officer fires a weapon as protesters gather in Bangkok on Nov. 14 after a court ruled that speeches by protest leaders calling for royal reforms amounted to a bid to overthrow the Thai monarchy. (Photo: AFP)

Crimes committed by policemen in Thailand have highlighted what outspoken Thais say is a culture of impunity among law enforcement officials.

In a case that angered many people in the Southeast Asian nation, a young police officer on an expensive Ducati motorcycle struck and killed a female doctor on Jan. 21 as she was crossing a road at a clearly marked pedestrian crossing on her way to work at a Bangkok hospital as an ophthalmologist.

While other vehicles stopped for the young woman to cross, the policeman on the motorbike ignored the pedestrian crossing and struck her down before fleeing the scene.

The policeman, whose duties had included controlling crowds of pro-democracy protesters, was later apprehended and claimed not to have seen the woman before running her over.

The doctor, 33, was rushed to hospital but was pronounced dead shortly afterwards.

Hit-and-run accidents are common in Thailand, which has one of the world’s highest traffic fatality rates with some 22,000 people dying on the country’s roads each year, most of them in accidents involving motorcycles.

So a cop kills a woman and he’s immediately released. A [democracy] activist criticizes the regime and he’s imprisoned for months or years

“The [culpable] officer was supposed to know the traffic laws, yet he ignored them. How can we expect police to enforce laws when officers themselves ignore those laws,” one Thai commenter noted.

“The word ‘accountability’ springs to mind,” another commenter noted. “The poor young woman was robbed of her life by a policeman.”

The policeman, who reportedly did not have a license plate on his motorbike, was charged with reckless driving causing death and released without bail, which further angered many citizens.

“So a cop kills a woman and he’s immediately released. A [democracy] activist criticizes the regime and he’s imprisoned for months or years,” a commenter noted.

“He left the scene of the crime and was immediately released without bail. What kind of country is this?” another asked.

On Jan. 24 it was announced that the policeman had entered the monkhood to make merit for the woman he killed based on the Thai belief that by becoming a monk he could earn karmic credit for his victim’s soul so that she will be reborn under auspicious new circumstances.

Meanwhile, in the southern Thai province of Trang, a senior policeman has been charged with raping two underage girls over an extended period in another case that grabbed national attention.

The 53-year-old man, who denies the charges, was indicted last week for allegedly raping a 12-year-old girl and her 16-year-old sister repeatedly.

The alleged abuse of the minors came to light after their grandmother reported it to a local foundation, which then called police.

This policeman, too, was released after being charged.

“He’s been released on bail, but students have been denied bail for peacefully voicing their opinions,” a commenter said, referring to the leaders of a student-led pro-democracy movement who have been imprisoned ahead of their trials on royal defamation and other charges and have repeatedly been denied bail by the courts.