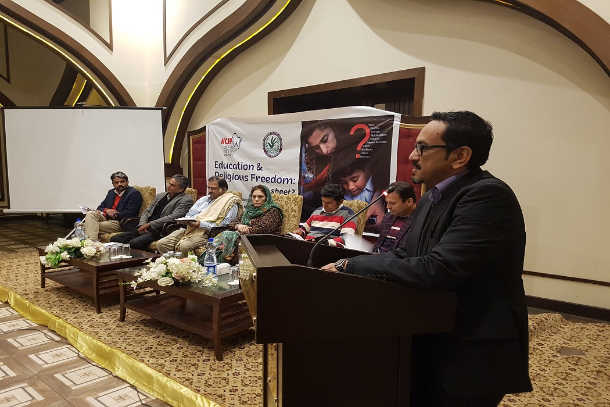 NCJP executive director, Cecil Chaudhry, speaks at the launch of a church study titled Education and Religious Freedom: a fact sheet,” in Lahore, Pakistan on Dec. 19. (Photo by Kamran Chaudhry)

Blasphemy allegations and violence against minorities and liberals in Pakistan are increasing in educational institutions, according to a church study.

The seven-year study titled "Education and Religious Freedom: a fact sheet," published by the Catholic Bishop's National Commission for Justice and Peace (NCJP), claims the school and college curricula cultivate aggressive discrimination against non-Muslims. "The curriculum produces students of a majority faith whose world view is largely anchored in nationalist Islamic orthodoxy. A complex interplay of other factors exacerbates the situation, resulting in young minds plagued by extremist mindsets, resistant to coexistence, open dialogue, and diversity," the study says."Recent years have seen an increase in blasphemy allegations in both online and offline spaces, particularly from Punjab," it added.Speaking at the launch of the report in Lahore on Dec. 19, the researchers highlighted several cases.The victimsIn March, a third-year student at Bahawalpur's Government Sadiq Egerton College stabbed to death associate professor Khalid Hameed, the head of the English department, for allegedly making anti-Islamic remarks.His classmates said the professor had organized a "farewell party" where male and female students were supposed to perform a Jhoomar – a folk music dance and that the student considered offensive to Islam.In April 2017, Mashal Khan, a journalism student in the northwestern city of Mardan was killed by an mob at Abdul Wali Khan University after being accused of blasphemy, a crime that carries a potential death sentence in Pakistan.Critics say the blasphemy law has been used to persecute religious minorities.In August the same year, a Christian teenager Sharoon Masih was beaten to death by Muslim classmates for drinking from the same glass as a Muslim at MC Model High School in Burewala, Punjab province.In 2013, Junaid Hafeez, a former English lecturer at Bahauddin Zakariya University, was arrested after being accused of posting derogatory comments about the Prophet Muhammad on social media. His lawyer, Rashid Rehman, was later shot dead in 2014 for representing him.Last weekend, a district court in Multan sentenced Junaid Hafeez -- another university lecturer -- to death for the same crime. The Human Rights Commission of Pakistan (HRCP) expressed dismay at the verdict.Commission chairman Mehdi Hasa believes the blasphemy laws are heavily misused."This is compounded by a trial process ridden by delays and pressures on the lower judiciary. The offense itself is already associated with vigilantism and entrenched impunity. The resulting pressure on lower courts becomes apparent when most such verdicts are overturned by the High Court or Supreme Court," Hasan said."In five years, at least eight judges have heard Mr. Hafeez's case, making a fair trial virtually impossible. Meanwhile, he has undergone six years of imprisonment in solitary confinement. Asia Bibi, who was charged similarly, was acquitted after eight years' incarceration. There are grave implications here for access to justice in such cases."According to Cecil Chaudhry, executive director of the NCJP, intolerance has advanced beyond religious minorities."It has become a generational issue. The latest study focuses more on the violation of our constitutional rights and international covenants," he told ucanews."Identifying fundamentalism and hate material in textbooks is like attempting a failed paper. No measures have been taken so far to implement the instructions of a 2014 judgment to reform the curricula."On June 19, 2014, Pakistan's Supreme Court, ordered the federal government to create a national council to promote the rights of minorities and provincial governments to create task forces to push religious tolerance, develop appropriate curricula in schools and colleges, protect places of worship and a crackdown on hate speech, among other measures. The latest study quotes references from provincial religious textbooks that give a negative portrayal of minorities."The Sikhs … have been presented as highly warlike people … and Jihad is glorified as a way to drive them out. Hindus are repeatedly described as the eternal enemies of Islam and their culture portrayed as unjust and cruel," it states.According to Abdul Hameed Nayyar, a retired academic, the study is an indictment against the country's educational officialdom and holds it responsible for poisoning youth against religious and ethnic diversity."Pakistan has suffered immeasurably on account of the mishandling of young minds for about four decades. Successive generations have slowly turned into social pariahs on the global scene. They are not only devoid of any useful social skills but are also easily attracted to destructive ideologies and movements," he stated.Iftikhar Mubarik, a child rights activist, said the way young people are taught in Pakistan's schools and colleges need a complete overhaul to change mindsets."Minority children are forced to hide their identity in schools. Content from other faiths should be included in textbooks. The government is still in denial mode. Even my daughter in fifth grade knows that her classmates do not sit with Christian students," he said.