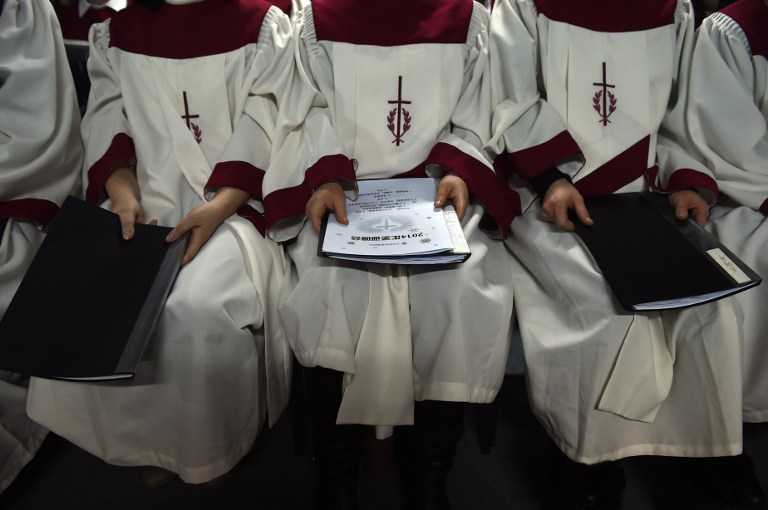 Choir members at a Beijing church service in this 2014 file photo. (Photo by Greg Baker/AFP)

The latest detainee, Protestant pastor Wang Yunxian of the Longwan Church in coastal Zhejiang province, was released Dec. 11 by authorities in Wenzhou.

However, Zhang Kai, the key lawyer who represented the churches in challenging the cross-removal campaign, remained in jail along with six other pastors.

A Wenzhou minister who identified himself as Luke said that Fang said he wasn't tortured during his detention but that "psychological pressure was inevitable."

Luke told ucanews.com the prisoner releases were "beneficial" to repairing China's image at home and abroad.

He also said the prisoner releases may be linked to the promotion of Chen Yixin, Communist Party secretary of Wenzhou — often known as the "Jerusalem of the East" because of its large Christian population — to be one of President Xi Jinping's top economic advisers.

"He may not want to leave himself a bad name before moving to Beijing," Luke said.

As Wenzhou's party boss, Chen was said to have presided over the cross-removal and church demolition campaign in the name of clearing illegal construction, according to the "South China Morning Post."

"Chen showed no distinctive performance as party boss of Wenzhou. The top leaders admired his firmness in the demolition campaign as he had to withstand great pressure domestically and internationally," said a Wenzhou Catholic named Peter.

It's estimated more than 1,500 crosses were removed, churches totally or partially demolished in Zhejiang during the two-year campaign that began in late 2013.

Local sources believe the campaign has subsided as China prepares for a planned national meeting on religious affairs.