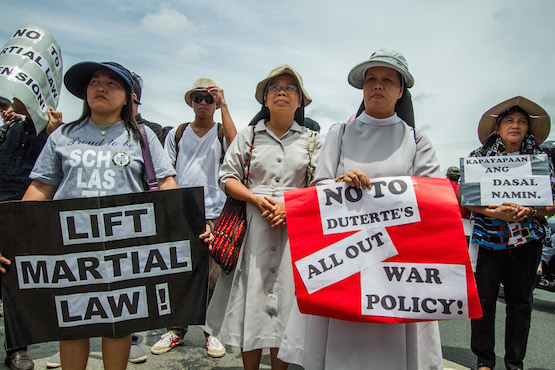 Members of the Rural Missionaries of the Philippines join a demonstration in Manila in July to call for an end to the conflict in Mindanao. (Photo by Mark Saludes)

Authorities arrested a church worker and five tribal people in the southern Philippines for alleged illegal possession of firearms and explosives during a raid in a tribal village.

Soldiers and policemen swooped on the village of Balit in San Luis town, Agusan del Sur province, in search of communist rebels on Oct. 27.

Authorities arrested five members of the tribal group Tagdumahan, an organization of Banwaon tribesmen, and Julito Rivera Otacan, of the Rural Missionaries of the Philippines (RMP).

The RMP is an inter-diocesan and inter-congregational Catholic organization of religious and lay people that live and work in poor communities.

Maridel Fano, RMP project manager, described Otacan's arrest as "an attack on the church." She said Otacan is the local church's link to poor tribal communities.

"The military has been targeting this community because of people's assertion of their right to ancestral land," said Fano.

She said the Banwaon tribe has been very vocal in their opposition to mining and logging operations in the area.

Norma Dollaga, convener of the ecumenical group Dambana in the region, called for an independent investigation into Otacan's arrest.

"There were allegations that the evidence found were planted by state forces," Dollaga told ucanews.com. Fano claimed that since martial law was declared in Mindanao on May 23 attacks and harassment of church and human rights workers have "intensified."

President Rodrigo Duterte declared martial law across the southern Philippines following the terrorist attack on the city of Marawi.

Chief Supt. Rolando Felix, regional police chief, said an investigation into the arrests were still ongoing to determine whether they were communist rebels.

Soldiers who conducted the raid claimed a rebel flag was also found.