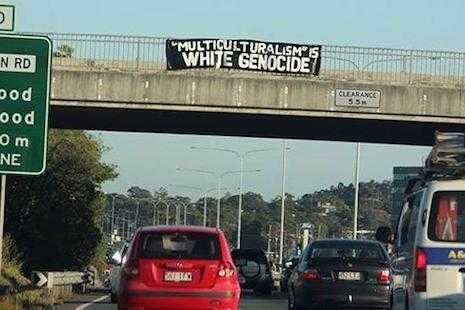 By Zac Alstin for MercatorNet

Racist incidents have crept into the news in Australia recently, with a Queensland teen filmed — by his friend — racially abusing and assaulting a security guard on a Brisbane train. Meanwhile, the national supermarket chain Woolworths apologized for ‘inadvertently’ stocking a singlet bearing the Australian flag motif with the words “if you don’t love it, leave”. Most bizarrely, a banner unfurled from a South East Queensland overpass shocked passers-by with the claim that “‘Multiculturalism’ is White Genocide”.

The words ‘white’ and ‘genocide’ are rarely seen together, and the reader may be forgiven for momentarily thinking that the banner was accusing multiculturalism of being a genocidal plot by white Australians.

But the intended meaning is far less frightening, though scary in its own way: evidently some white Australians think that multiculturalism is effectively a form of genocide against the overwhelming majority of the population with British or Irish ancestry.

Five minutes with Google reveal two distinct themes relating to the term ‘white genocide’: the first is the use of ‘white genocide’ to describe cultural assimilation in the context of the actual Armenian genocide. The ‘white’ refers not to skin color but is used, apparently, to distinguish ‘cultural’ genocide from its ‘red’ violent counterpart.

The second context for ‘white genocide’ describes the strange phenomenon of apparently conspiracy-theorist white supremacists convinced that ‘whites’ are being globally displaced, and that migration to ‘white’ nations is part of an ‘anti-white’ plot aimed, according to their Facebook page, at “flooding White countries with millions of non-White immigrants and then forcing their culture and customs on us.”

Claims of genocide against white Australians are outrageous, insulting, and historically inept. Yet we may have to forgive people for holding such views. They’ve heard about genocide, maybe seen a documentary on it in some far off land; but what about the history of ‘white genocide’, the cultural memory of this phenomenon, the moral seriousness that accompanies the lived experience of such suffering?

White Australians are generally in the privileged position of being able only to imagine the kind of persecution, suffering, and violence that a select few religious and ethnic groups have endured for real. It’s as though they’ve looked around at the steady stream of migrants and wondered ‘maybe this is that genocide thing we’ve heard so much about?’

What these ‘pro-White’ activists lack in moral seriousness, they make up for with a bizarre, depressingly sincere global persecution complex, an anthropologically untenable racial category of ‘White’, and a seemingly limitless sympathy for their own imagined plight.

Zac Alstin is a freelance writer living in Adelaide, South Australia. He blogs at zacalstin.com.