An Vietnamese-born Australian bishop has roundly condemned the recent destruction of more than 100 homes, including a church-run one for disabled war veterans, by state officials in southern Vietnam.

"I learned with great sorrow of the destruction of your beloved homes and properties by the authorities in Ho Chi Minh City," Bishop Vincent Nguyen Van Long of Parramatta in Australia told the victims in an open letter.

Bishop Long, who was born in Vietnam before fleeing the communist country by boat in 1979, said the cleared land belongs to generations of people who moved from the north 65 years ago.

Tan Binh District authorities completely destroyed, without any prior warning, 112 houses on a plot of land registered to 134 households in Lộc Hưng near Ho Chi Minh City on Jan. 4 and Jan. 8. 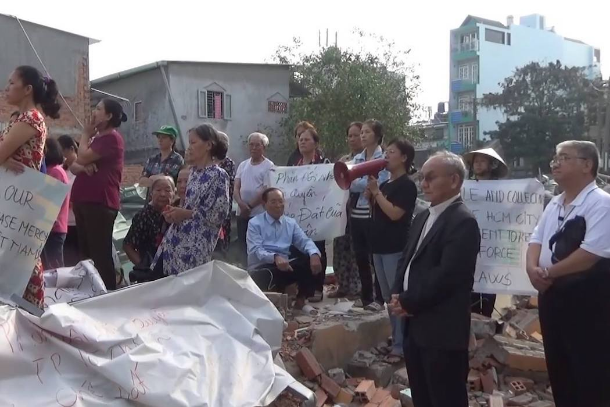 The local officials claimed the houses were illegally built. Many people were made homeless after their houses were pulled down on Jan. 8 near Ho Chi Minh City. (Photo courtesy of tinmungchonguoingheo.com).

Bishop Long described the eviction  as "a pattern of behavior on the part of the communist government in Vietnam ironically since the so-called 'doi moi' (reform) era, as demonstrated in many incidents throughout the country."

The head of the Australian bishops' Catholic Commission for Justice and Peace, said the reporting of the incident by state-run media does not accord with what happened on the ground as testified by the victims.

"Many of them are left at the mercy of the elements and the support of religious groups such as the Redemptorist Fathers and fellow parishioners," said the 58-year-old prelate.

"I would like to express my deep solidarity with you and add my support to your struggle for dignity in the midst of the incredible ordeal that has been forced on you," he said. "I pray that you remain committed in your faith and your search for justice."

On Jan. 10, Redemptorist Father Anthony Le Ngoc Thanh called on the government to compensate the victims for the "physical and spiritual damage" caused by local officials.

He said in a statement that his office owns a 224-square-meter plot of land where the eviction took place and that one of its houses, where 18 war veterans lived, was destroyed.

He said local Redemptorists were seeking temporary accommodation for the displaced war veterans and at permanent ways to support them. They are also looking at launching a campaign to make the government return the properties.

Father Thanh has appealed for donations to helm the evicted people.

Father Joseph Mary Le Quoc Thang and four activists have launched a fund-raising campaign to support two former prisoners of conscience, Huynh Anh Tu and Pham Thanh Nghien, who had only been in their newly-built house a week before it was pulled down on Jan 8.

They plan to build a new house for the couple whose son suffers from severe asthma attacks.