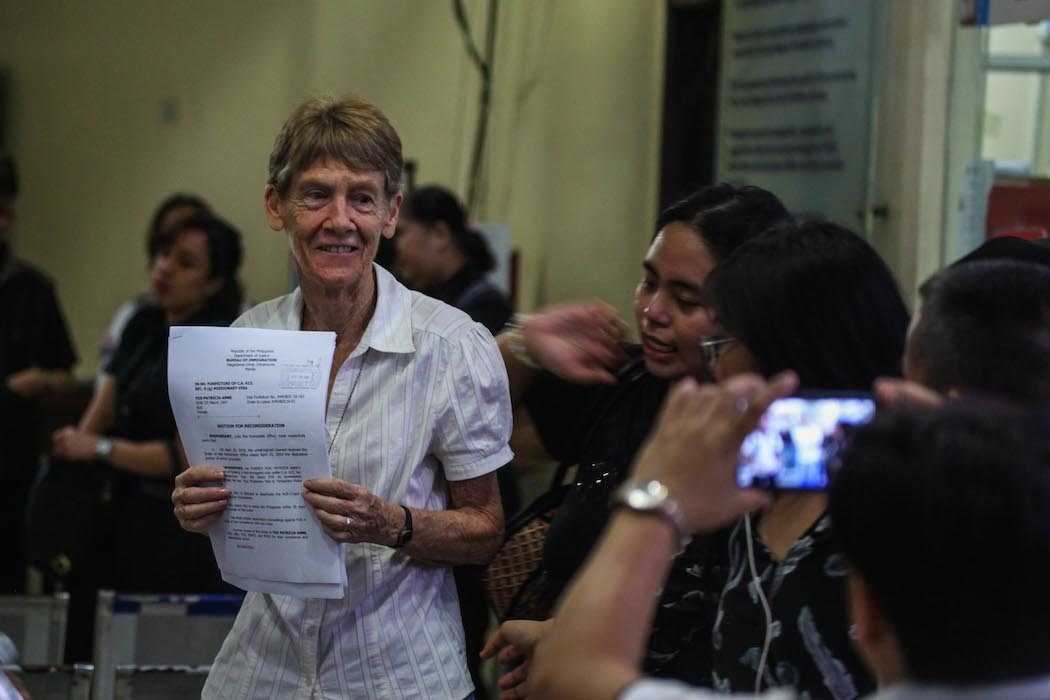 Australian missionary nun Patricia Fox greets her supporters at the immigration bureau office in Manila in this April 30 photo. (Photo by Jire Carreon)

An Australian nun ordered by the Philippine authorities to leave the country on May 25 said she is not leaving voluntarily.

Catholic missionary Patricia Fox claimed she was not given due process when the Bureau of Immigration downgraded her missionary visa to a temporary visitor's pass.

"If I do not contest the government's order, it could become a bad precedent," she told ucanews.com, adding that missionaries who come to the Philippines will face the same predicament.

On May 23, the immigration bureau rejected the nun's appeal for it to reinstate her missionary visa.

The bureau also dismissed Sister Fox's claims of lack of due process. The bureau said its decision to order the nun to leave the country was "final."

The 71-year-old Australian missionary was arrested on April 16 and detained overnight before an order to leave the country was issued.

It also "deactivated" her alien certificate of registration. Sister Patricia Fox joins a group of religious in an outdoor prayer gathering in Manila on May 17. (Photo by Jire Carreon)

Sister Fox said she was invoking her right to due process and will not leave the country. She said she would challenge the Philippine government's "erroneous definition of apostolic and missionary work."

"I was supposed to be given the chance to answer the accusations, but the government abused its power and created its own interpretation of the church's mandate," she told ucanews.com.

Immigration bureau spokeswoman Dana Sandoval warned that Sister Fox could be banned from entering the Philippines again if she defies the order for her to leave.

Sandoval said new deportation proceedings would be initiated against the nun if she fails to comply with the order for her to leave the country by May 25.

As of now, Sister Fox can return to the country as a tourist pending the resolution of her existing deportation case and if she is not blacklisted by the bureau.

"According to the order, [the bureau] will initiate deportation proceedings in case of non-compliance," said Sandoval in a message to ucanews.com.

Sister Fox's lawyer was set to file a petition with the Department of Justice on May 25 to challenge the immigration bureau's order.

"[She] has the right to be accorded due process and equal protection under the law," said lawyer Jobert Pahilga, adding that the case has "far-reaching implications on other foreigners in the Philippines."

Sister Fox is the regional superior of the international congregation Sisters of Our Lady of Sion in the Philippines.