As a new generation joins them, the veterans can look back on their service with pride 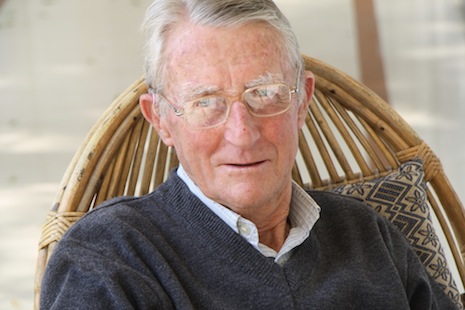 Bill Dwyer, one of trhe Jesuits who has been in India since the 1950s, has become an expert in Hindi

Tony Herbert had one week to decide to become a missionary. The Jesuit was in his early 20s when his provincial in Australia asked him whether he could imagine going to India.

"I had never thought of it," he says. "But I told the provincial I would work wherever I was sent." He took a week’s home leave, said goodbye to his parents and boarded the ship to India.

That was almost 50 years ago and he has been there ever since. In one of the poorest states, Jharkhand, he started working in Jesuit schools and later, as a parish priest, did pastoral work in villages.

In the course of this, he found himself completely immersed in a rural community: a village of Dalits, the so-called ‘Untouchables,’ the lowest of the Indian caste system. Herbert shared their daily life and customs and worked to improve their living conditions.

"The fact that I chose to live with them meant a lot to the people," he says. "In return they taught me so much about community life. Evangelization is a two way process and the Dalits have evangelized me more than I have them."

Since the early 1950s, a group of around 50 Australian Jesuits have built up the dioceses of Daltonganj and Hazaribagh in Jharkhand. Today 15 of them still live in the area, now supported by Indian Jesuits and local diocesan priests who have taken much of their work.

This is typical of the generational change that is taking place in several Indian dioceses. After more than 60 years, the period in which foreigners helped to build up the Catholic Church in India is reaching a natural end.

The Australians in Jharkhand can look back on their tenure with justifiable pride. They have truly spread the spirit of the Second Vatican Council, involving themselves with the poor, trying to increase their standard of living and free them from the oppression of the caste system.

In their schools they have taught Christian values to children of all faiths. But contrary to a widespread assumption, they have done this without forcing them to the baptismal font.

"In all my years in India I probably haven't converted a single person," says Ken McNamara, who stepped off the boat in 1956. "For me to be a missionary simply means: go out to the people, live with them and try to like them. "

Peter Jones, another of the veterans, says it was a spirit of adventure that made him come to India. He had an early clue that Asia would win importance in the world and wanted to meet this culture.

He firmly believes that he has benefited immensely from the experience. “Indians think in a more holistic way and this balance is needed in the world,” he says. “Living here you take on some of this."

Perhaps it is not just a sense of mission that has helped the Australians through the years in India, but also their interest in foreign culture and a commitment to lifelong learning – even in religious matters .

"For me, the main spiritual exercise is knowing Jesus", says Jones.

"I committed myself at a certain stage of my life and then I threw myself into it", Jones said. "You may not always like it, but liking and willing are two different things. I continued even in difficult times, because I had committed myself to Jesus. "

According to their talents, the missionaries have taken on – and in many cases excelled at – a wide range of challenges. Bill Dwyer, who came to India in 1952, made great efforts to learn Hindi and eventually became a respected expert. He wrote his doctoral thesis on the medieval mystic Kabir and worked on a translation of the Bible into Hindi.

"Being a missionary is learning, appreciating Indian culture," he says. "I came to India to help build up the Church and found myself being on the receiving end."

The social dimension of the gospel defines these Australian missionaries even today. "What I do in India you can call a gospel response to the reality of the poor," says Herbert.

"There is a choice to be made to go beyond the edge, to the margin, because that's where you find the meaning of the gospel."

This same spirit undoubtedly drives the Indian Jesuits who have joined them and now continue their work.

"Gospel values are human values,” says M.K. Jose, who comes from the southern state of Kerala and is thus, in effect, a missionary in his own country.

“We try to create a human society, by providing the marginalized with education and fulfillment of their basic needs."

Jose works with Dalits in the villages around Hazariabagh. He runs self-help groups for women, micro-banking initiatives and has taken up law studies to contribute to the Jesuits’ legal aid facilities.

"In former times the main idea of being a missionary was conversion,” he says. “But exposed to the realities of poor people, I changed my ideas from conversion to conscientization. I try to help people to be fully human, fully alive to the world."

P. J. James, the principal of the Jesuit St Xavier 's School in Hazaribagh, has come to a similar conclusion. "I left home to baptise people, he says. “But by working with tribals as a young priest, I learnt very fast what it means to be a Christian amid the reality of poverty, ignorance and injustice.

“Establishing the Church is important, he adds. “But getting involved in justice and livelihood issues is just as important. We need to make disciples, but they don't need to be part of the Catholic Church. We have to make a difference to lives. We do not have the monopoly on God."