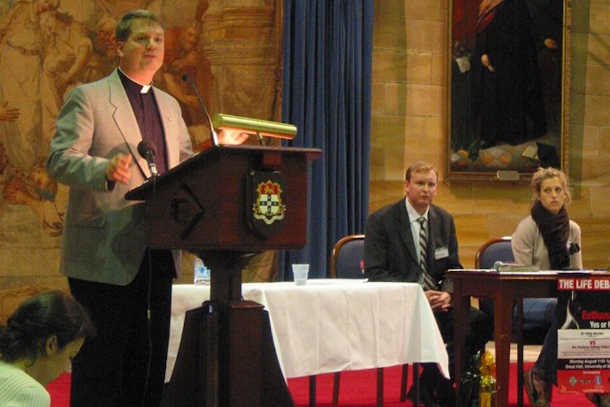 Archbishop Anthony Fisher of Sydney joined other Christian leaders in Australia to urge the government to distribute a Covid-19 vaccine that does not use aborted human fetus cells.

Archbishop Fisher, Anglican Archbishop Glenn Davies of Sydney and Greek Orthodox Primate of Australia Archbishop Makarios wrote to the Australian government on Aug. 20 expressing their concerns, Catholic News Agency reported Aug. 24. The letter said a vaccine the government plans to distribute “will raise serious issues of conscience for a proportion of our population” because of its reported use of human fetus cells.Archbishop Fisher, in a column in Sydney’s The Catholic Weekly, urged the government to fund the distribution of an ethical vaccine for Covid-19.“I’m a strong advocate of vaccinations – and not just for Covid-19 – as long as they are safe and ethically obtained,” the archbishop wrote in the column titled “Let’s not create an ethical dilemma.”“There are ethically untainted alternatives: let’s pursue those,” he said.

Last week, the Australian government inked a $24.7 million pact with pharma major AstraZeneca to distribute a Covid-19 once it is developed. The vaccine, developed with the University of Oxford, is in the clinical trials phase.

The vaccine is reported to have used the cell-line HEK-293, which is “cultured from an selectively aborted human fetus,” Archbishop Fisher said.The U.S. government has also joined hands with AstraZeneca to distribute the vaccine.Archbishop Fisher warned that people in Australia will face “significant pressure to receive it.”Health Minister Greg Hunt has suggested that people who refuse the vaccine may lose government assistance on childcare.Deputy chief medical officer Nick Coatsworth defended Oxford University researchers saying their vaccine is one of several candidates that use the controversial HEK-293 cell line.Last week, Pope Francis urged global nations to make available New Coronavirus vaccines “universal and for all” rather than “the property of this nation or another.”The 2008 Vatican document Dignitas Personae said that researchers have “a duty to refuse to use such ‘biological material’ even when there is no close connection between the researcher and the actions of those who performed the artificial fertilization or the abortion.”