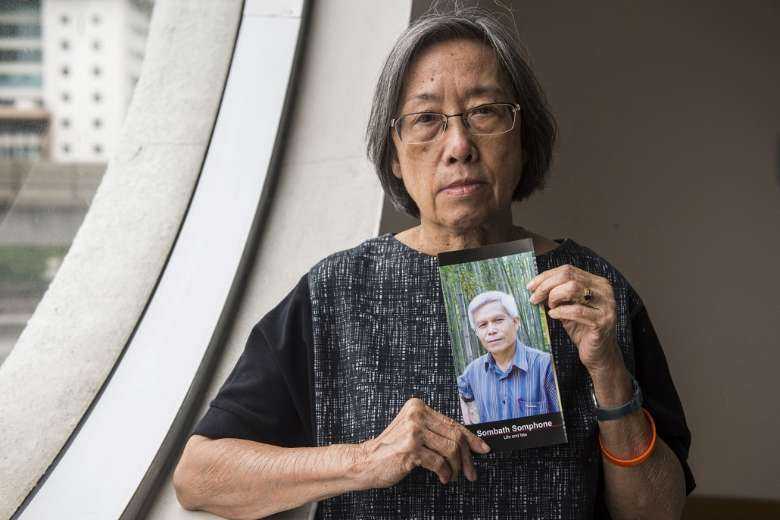 Shui-Meng Ng holds a photo of her missing husband Sombath Somphone, an award-winning Lao environmental campaigner, following a press conference in Bangkok on Dec. 12, 2018. The activist vanished after being stopped by police at a checkpoint in Vientiane on Dec. 15, 2012. (Photo: AFP)

A prominent rights group has called on the government of Australia to urge Laos to improve its human rights record during a bipartite dialogue today between the two nations.

“The Lao government’s suppression of fundamental rights and lack of accountability for abuses stand out in just about every respect,” said Elaine Pearson, Australia director at Human Rights Watch.

“Australia should use its leverage as a major development partner of Laos to press for specific actions to bring significant rights improvements,” Pearson added in a statement.

Of special concern is Laotian authorities’ treatment of political dissidents, including alleged cases of enforced disappearances, according to the rights group.

Laotian authorities have long been condemned by international rights activists in their alleged complicity in making Sombath Somphone, a well-known community development activist, disappear in December 2012.

On Dec. 15 that year, Sombath was stopped in his vehicle by police officers at a checkpoint on the outskirts of Vientiane, the capital of Laos, and was forced into a pickup truck, which drove him driven away, according to CCTV footage taken at the site.

The prominent activist has not been seen since and calls on Laotian authorities to disclose his whereabouts or what happened to him have gone unheeded.

“We can see clearly that the Lao government has never been interested in disappeared persons or their families. For example, they have never reported progress on the case of Sombath Somphone,” Phil Robertson, deputy director of Human Rights Watch’s Asia Division, said last year.

“Lao authorities have repeatedly claimed they have been investigating Sombath’s enforced disappearance but have failed to disclose any new findings to the public since June 8, 2013,” the ICJ noted.

Meanwhile in August 2019, Od Sayavong, a Lao rights activist living in Bangkok, was abducted and has not been seen since. He is presumed dead.

Rights activists believe the agents of the government of Laos, a landlocked communist holdout of slightly over 7 million people, has been behind his disappearance.

The government in Vientiane, which routinely jails and persecutes citizens over even innocuous criticisms, has also been accused of turning a blind eye to the murder of three Thai political dissidents in exile in the country who disappeared in Vientiane in December 2018.

Soon after their disappearance in Laos, the badly mutilated bodies of Surachai Danwattananusorn, 78, a prominent Thai anti-monarchist, and two of his aides were found floating in the Mekong River, which serves as a natural boundary between Laos and Thailand.

Rights activists have alleged that the Thai and Lao governments have aided each other in these enforced disappearances of their respective nationals in a quid pro quo agreement.

“The Lao government seems intent on sweeping the abduction and gruesome murder of Thai activists under the rug,” Brad Adams, Asia director of Human Rights Watch, said in an earlier statement.

“Lao authorities need to credibly investigate and prosecute this heinous case, which has raised alarms for Thai activists in exile in Laos,” Adams added.

Despite such repeated calls, however, no meaningful progress has been made on at least 10 cases of enforced disappearance in Laos, according to rights activists.

“The case of a prominent Lao civil society activist, Sombath Somphone, is emblematic of the government’s failure to act in line with its international obligations,” Human Rights Watch said in its latest statement in which it has called on Australia’s government to lean on its Lao counterpart to investigate the case.

“The annual Australia-Laos human rights dialogue shouldn’t be the only forum during the year where human rights are discussed,” Pearson added.

“Concerns about human rights should also be raised privately and publicly at the highest level, so that Australian officials can convey the critical role human rights and the rule of law play in its partnership with Laos.”