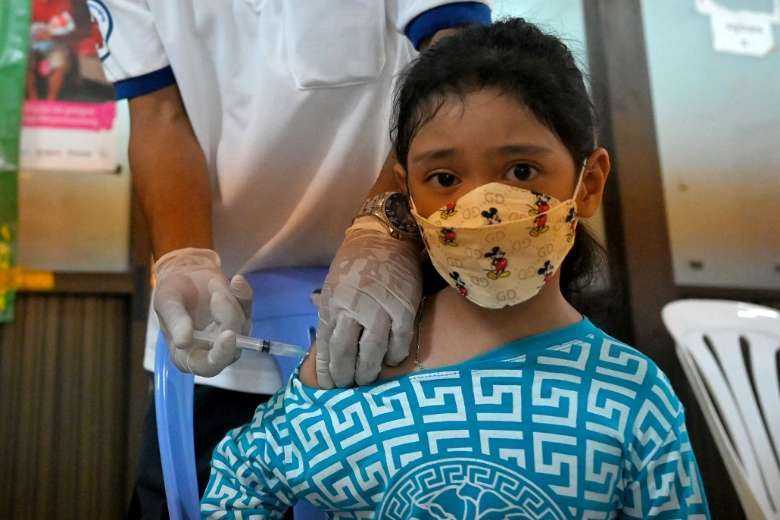 A girl receives a dose of the Sinovac Covid-19 vaccine at a health center in Phnom Penh on Nov. 1 as Cambodia began vaccinating children from aged five and older. (Photo: AFP)

Australia will deliver 2.3 million Covid-19 vaccines by the end of the year, living up to promises made to Prime Minister Hun Sen earlier this year.

Hun Sen said the vaccines would arrive on Boxing Day and Dec. 28 after he warned Australia he would purchase three million doses of Chinese made-Sinovac if Canberra failed to deliver on time.

The premier has also said Cambodians would receive a fourth booster shot following a rapid rollout of a vaccination program, which has resulted in an end to lockdowns and the Nov. 1 opening of the country in a bid to revive a pandemic-crushed economy.

Discussions are underway to reopen land borders with Vietnam.

Cambodia has so far received more than 40 million doses of Covid-19 vaccines, mainly from China.

“The kingdom has so far administered at least one dose of vaccine to more than 14 million people, or nearly 89 percent of its total population. More than three million people have received a third dose or a booster shot,” Hun Sen said in a dispatch from the government-friendly Fresh News service.

Cambodia ended rapid testing for the disease at the end of September and instead relies on PCR lab tests. Since then daily confirmed cases have fallen from nearly 900 to just four on Dec. 21 and for the first time in seven months Cambodia has registered no deaths.

Last week health authorities detected the country's first case of the Omicron variant of the coronavirus in a local woman who had traveled from Ghana.

However, neighboring countries are still struggling. Vietnam is recording more than 14,000 cases a day and Thailand more than 2,000 a day despite both countries inoculating more than 70 percent of their respective populations with at least one jab.

Laos, where more than 50 percent of the population has received at least one jab, is recording around 1,000 Covid-19 cases a day.

The fresh batches of vaccines follows a visit by Australian Foreign Minister Marise Payne in November and the naval frigate HMAS Anzac in October when the crew delivered 800kg of Covid-related medical and personal protective equipment to the Royal Cambodian Armed Forces.

“Australia’s development partnership has pivoted to support Cambodia’s Covid-19 response and recovery,” Payne said following her visit. “We are providing $35.7 million to support procurement and delivery of safe and effective vaccines.”

Hun Sen is expected to preside over the handover ceremony for the arrival of the Pfizer vaccines at Phnom Penh International Airport.

He also thanked China, Japan, the United Kingdom, United States and the Netherlands for providing vaccine aid to Cambodia to fight the contagion.