In recent days, nearly 3,000 migrants have swum to shore or been rescued near Indonesia, Malaysia, Thailand 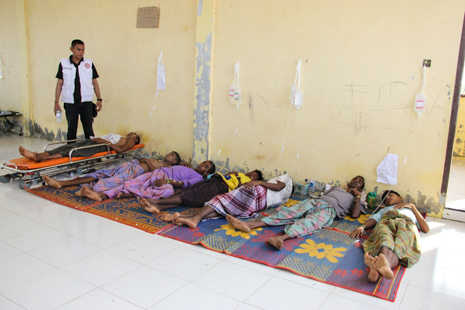 Australia reiterated its backing Tuesday for its regional neighbors' efforts to stem a surge in boatpeople in Southeast Asia by turning back vessels — a controversial strategy to deter people-smuggling also used by Canberra.

Indonesia, Malaysia and Thailand have sparked international outrage by turning away some boats carrying Rohingya Muslims and Bangladeshis.

"Like Australia, countries in the region have a sovereign right to respond to these matters as they see fit," Australia's Immigration Minister Peter Dutton said.

"Nobody wants to see deaths at sea and the Australian government will provide whatever support we can to people within the region to provide humanitarian support and assistance," he added in an interview with The Australian newspaper.

"Ultimately our desire is to do the people-smugglers out of business here, in Southeast Asia or across the world."

Nearly 3,000 migrants have swum to shore or been rescued off Indonesia, Malaysia and Thailand in recent days, while thousands more are believed to be still stranded at sea after a Thai crackdown disrupted long-established people-smuggling routes.

Indonesian fishermen rescued hundreds of migrants, many of whom are fleeing persecution, from a sinking vessel off Aceh, on the Indonesian island of Sumatra, but the military is patrolling the Indonesian coast to stop boats from entering.

Amid fears that time is running out to rescue thousands still believed to be trapped with scarce supplies, details have emerged of brutal fighting onboard the stricken vessel off the Indonesian coast with metal bars and knives on Friday that left at least 100 people dead.

Prime Minister Tony Abbott said he was appalled at the latest demonstration of the "evil trade" of people-smuggling, adding that he fully supported the turning back of vessels.

"The most compassionate thing we can do to end the deaths is to stop the boats," he told reporters in Sydney.

"Frankly, the only way to stop the boats is to be prepared to turn them around. It has to be done where it is safe. You have always got to treat people with decency and humanity but if we don't stop the boats, we can't stop the deaths."

Tens of thousands of Rohingya Muslims, a minority who face daily prejudice and a raft of restrictions in western Myanmar, have long fled in barely sea-worthy boats across the Bay of Bengal.

In recent years they have been joined by growing numbers of economic migrants from neighboring Bangladesh looking to escape grinding poverty.

Canberra introduced a controversial policy in 2013 to turn back boats to prevent thousands of people risking their lives by making the long sea journey to Australia, a route that had cost hundreds of lives.

It has proved to be successful with only one boat arriving in the past 18 months. AFP