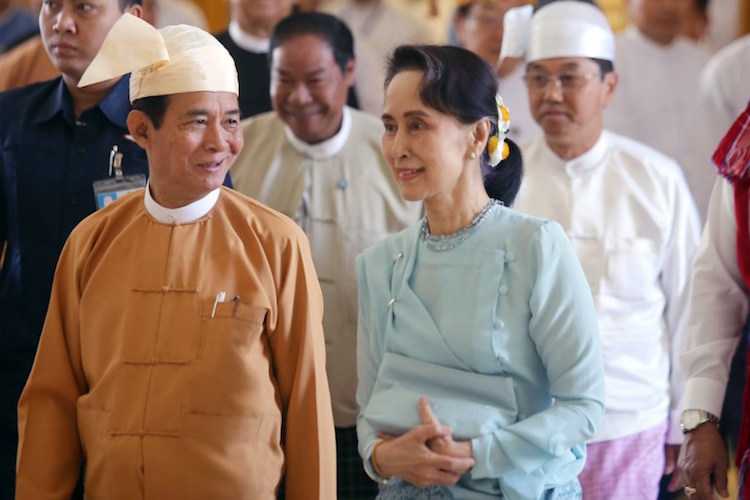 Myanmar's President Win Myint and State Counsellor Aung San Suu Kyi arrive at the parliament in Naypyidaw to take his oath of office on March 30. (Photo by Thet Aung/AFP)

Myanmar's de facto leader Aung San Suu Kyi appears unwilling or unable to grapple publicly with the still escalating Rohingya crisis, choosing to give it short shrift in a speech made to commemorate the second anniversary of her government's official swearing-in on April 1.

And despite promises and an agreement with Bangladesh, so far no Rohingya have been repatriated.

"We are facing challenges from inside and outside of the country, as we are struggling to develop politics, society and economy," Suu Kyi said during her address on national television.

Suu Kyi made only passing reference to the crisis in the north of western Rakhine State where a military operation — over which she has no power due to an effective power sharing arrangement with the generals — has been ongoing against the Rohingya since August.

As part of that she urged people to "respect the intentions and vision of the international community."

"The world's focus in on Rakhine right now, but we also need to peacefully develop the country. We are facing challenges from inside and outside of the country, as we are struggling to develop politics, society and economy," she said.

Bangladesh sent a list of more than 8,000 Rohingya refugees who want to return to Rakhine but Myanmar officials have agreed to accept around 500 who have been verified for repatriation. But those 500 are yet to be processed to return.

Myanmar has agreed to the United Nations refugee agency initiating the repatriating of more than 700,000 refugees in Bangladesh. The Myanmar government, UNDP and UNHCR are planning to sign the memorandum of understanding, according to a Radio Free Asia report on March 30.

Hundreds of thousands of the minority now live in makeshift camps in Bangladesh where conditions are deteriorating and there are fears over what could occur during the upcoming monsoon season that commences in June.

"There is a prospect that the government will move to prioritizing the economy but we need to wait and see how the implementation process works in practice," Khin Mg said.

He said that a fall in foreign investment in Myanmar is not directly linked with the Rakhine crisis issue as the U.S. and E.U.-led companies were not coming to invest even before the crisis began.

"The country's slow economic growth is dependent on policy and the prioritizing of the NLD government. I don't think the Rakhine issue has directly had an impact on the economic situation in the country," said Khin Mg Nyo.

But he added that the NLD government had not prioritized economic reforms in the first two years of its term.

Yan Myo Thein, a Yangon-based political analyst, said Suu Kyi had highlighted collective strength. "I see it as a collaboration among the government, military, parliament, political parties, ethnic armed groups and civil society towards the development of the country," said Yan Myo Thein.

"In terms of foreign investment, the government needs to invite more investment from the West and create an environment which will attract more investors so that employment opportunities will come, tackling the socio-economic problems faced by the people," said Yan Myo Thein.

"It is not possible the [country can] developed without foreign investment," he said.

Unlike Khin Mg Nyo, he said the Rakhine crisis has affected foreign investment in Myanmar.

He added that the new president will focus on rule of law and socio-economic issues. Yan Myo Thein said the government likewise needs to tackle corruption which has been deeply rooted in Myanmar for decades.

"Tackling corruption is an urgent matter as it is also related with the rule of law and socio-economics," he said.

Chris Lewa, director of the Rohingya advocacy group-the Arakan Project, confirmed that the boatfull of Rohingya refugees that stopped at the Thai island of Koh Lanta on the weekend had left from Sittwe, the capital city of Rakhine State.

"They had been a few reported attempts last December and January but no departure had been confirmed. This is the first boat we heard of," Lewa told ucanews.com.

There was a surge of Rohingya fleeing from restrictive refugee camps near Sittwe in 2014-2015 but the discovery of effective prison camps on the Thai-Malaysia border with hundreds of dead bodies saw the trend halted.

Lewa, however, doesn't expect more departures as April is the end of the sailing season with the weather and sea becoming rough as the wet season approaches.