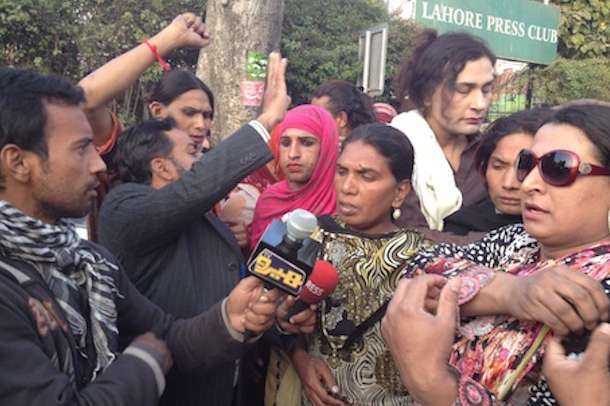 Transgender people speak to reporters outside Lahore Press Club in this 2013 file photo.

The shooting of a transgender activist one month ago and a recent wave of attacks against the transgender community in Pakistan are extremely concerning, according to global civil society alliance CIVICUS.

“We urge the authorities in Pakistan to organize prompt and impartial investigations into the attacks and make sure the perpetrators are brought to justice without delay,” the group said in an Oct. 8 statement.

Transgender activist Gul Panra was killed by an unidentified gunman in Peshawar's Tehkal area on Sept. 8. Another transgender person, Tariq alias Chahat, was injured in the same attack.

The shooting occurred after a group of transgender people performed at a wedding function and were preparing to leave. A police official said four suspects had been detained in connection with the shooting, but no further progress has been reported.

In another incident, a transgender woman was allegedly gunned down by her younger brother in Swabi city on Sept. 12. Saad Khan had gone to Rawalpindi and Islamabad to take part in several dance performances, which her family opposed. She was shot when she returned.

On Oct. 6, another transgender person was seriously injured after being shot on the way home to Shahmansoor after performing in a music concert in Buner.

“The authorities must take serious steps to investigate these brutal attacks and killings. Ensuring justice and accountability for the violence perpetrated against transgender people in Pakistan will send a signal that such acts will not be tolerated, and that all citizens — no matter what their gender identity — will be protected,” said Josef Benedict, CIVICUS Asia-Pacific civic space researcher.

The attacks prompted transgender activists to hold protests in Karachi, Lahore, Mardan and other cities in Pakistan.

Protesters believe the government does not take their security seriously. According to Pakistan’s Transgender Association, at least 73 members of the transgender community have been killed since 2015. The group also states that the police regularly fail to document threats made against transgender people.

“On a daily basis, we face stigma and discrimination as well as harassment and exclusion from society. The recent spate of violence is very disturbing for the entire transgender community — many are afraid to venture out due to fear of attacks. We demand justice for the victims of these attacks and call on the Pakistani authorities to protect the transgender community in accordance with the law,” said Saro Imran, a transgender activist running a community-based organization in Pakistan.

In 2018, after a long struggle waged by the Pakistani transgender community alongside civil society, Pakistan’s senate passed the Transgender Persons (Protection of Rights) Act, which explicitly prohibits discrimination and harassment of trans people and protects their right to access healthcare and public spaces.

However, implementation of the law is weak and transgender people in Pakistan still face high levels of discrimination and violence. Many face challenges accessing the public healthcare system, education, employment and other institutions. Also, according to rights groups, the authorities abuse transgender women and threaten them when they seek justice.