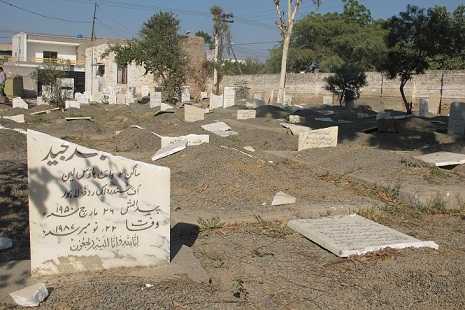 A family was assaulted and at least 120 tombstones desecrated in an attack on an Ahmadi graveyard on Monday in Lahore.

“They locked my family and some other relatives in a room. We were beaten, our hands were tied but the women and children were spared. Luckily I managed to call for help before they took my phone,” a gravedigger at the cemetery said yesterday.

“We heard tombstones being smashed and even saw one person through a window taking photos. This continued until gunshots were heard which scared them away,” added the gravedigger, who did not wished to be named.

Police have registered a first information report against 15 to 20 unknown attackers for attempted murder, trespassing, robbery and the desecration of at least 120 tombstones. But the local Ahmadi community is not confident any arrests will be made.

“The station house officer was not willing to accept our report. We were interrogated as if we were the culprits. It took five hours to convince them,” the gravedigger said.

The attack was another example of the persecution that Ahmadis have had to endure in Lahore over the years, community spokesman Salim ud Din said.

Many mainstream Muslims regard the Ahmadis as a heretical Islamic sect.

The Pakistan government declared them non-Muslims in 1974.

In the 1980’s Ahmadi graves were dug up and the bodies moved from the from the city’s main cemetery after the then military ruler General Zia-Ul-Haq effectively made it a crime for Ahmadis to do anything Islamic.

The situation in Lahore took a darker turn in 2010 when 88 Ahmadis were killed in separate attacks on the same day on two Ahmadi mosques.