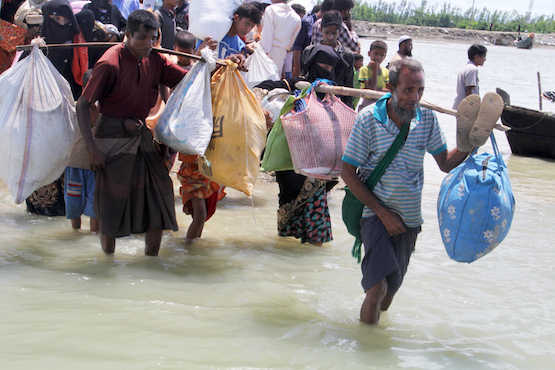 “ARSA has … no other option but to combat Burmese state-sponsored terrorism against the Rohingya population for the purpose of defending, salvaging and protecting the Rohingya community,” the group said.

The attack came after Aug. 25 attacks on 30 security posts and an army base in Rakhine that triggered a brutal retaliatory military crackdown, dubbed as “ethnic cleansing” of minority Rohingya Muslims by the United Nations.

The so-called “clearance operations” left hundreds of civilian Rohingya killed, dozens of women raped and hundreds of Rohingya villages burned down by military and extremist Buddhists. It forced more than 650,000 Rohingya to flee to Bangladesh.

Abul Hashem, 45, from Maungdaw, moved to Kutupalong refugee camp in Cox’s Bazar in late August with his family.

“We came to know from the media that ARSA carried out an attack on the military. We don’t know whether Rohingya militants were behind it or if it was stage-managed by the military, but it is bad news as it does not help in implementing any good agenda for Rohingya,” Hashem, a former schoolteacher, told ucanews.com.

“The Rohingya want a peaceful solution to the crisis and they don’t condone any form of violence or militancy. We want to go back home but we want to see peace established first in Rakhine so that our safe, peaceful return is ensured.”

Rashid Ahmed, 37, moved to Bangladesh with his family in 1992 following an earlier bout of violence.

“I think the Jan. 5 attack was a ploy by the military or maybe it was carried out by ARSA with backing from groups who don’t want to see us return to Rakhine. We don’t support ARSA and condemn all forms of violence as it does not help Rohingya,” Ahmed told ucanews.com.

“The latest violence has instilled fear among the Rohingya community and they think it might delay or even postpone their return to Rakhine. We know Myanmar does not want us and we want to go back home, but we want guarantee of our peaceful return and living first.”

Muhammad Muniruzzaman, a retired major-general and a Dhaka-based security analyst, said the latest violence will not harm refugee repatriation and the peace process directly but it could complicate the issue.

“It seems ARSA wants to press Myanmar to resolve conflicting issues in Rakhine before repatriation starts. The process won’t be halted but it might be delayed and Myanmar might move away from apparently positive and cooperative position,” Muniruzzaman said.

“It is not yet established if ARSA has any link with international terror groups but it is true they have their moral support. ARSA’s ongoing activities, even on a small scale, show they still have backing from Rohingya whose backs are pressed against the wall amid persecution.”

“ARSA and its backers might have a hidden agenda out of the crisis, which we don’t know yet, and they are unlikely to stop before their goals are achieved. This is unacceptable as it would deter the repatriation, peace process and make the lives of Rohingya worse,” Rozario told ucanews.com.