Islamist militants believed to be behind second fatal attack this year Police escort two suspects in Dhaka on Monday alleged to have hacked to death an atheist blogger. (Photo by Stephen Uttom)

Washiqur Rahman, 27, was declared dead at Dhaka Medical College Hospital, hours after three men believed to be militants attacked him with machetes at the Tejgaon industrial area of the capital.

Two of three attackers were arrested after they were caught by locals and handed over to local police, a police official said. The third remains at large.

“The two attackers are madrasa students, but we suspect they might be members of a militant group,” said Biplob Kumar Saha, deputy commissioner of Tejgaon Zone of Dhaka police. “The attackers had followed Washiqur Rahman since yesterday and attacked him this morning while he was on his way to his office.”

Rahman's killing follows the February 26 murder of prominent atheist blogger and science writer Avijit Roy. He was also hacked to death in the middle of Dhaka in an attack that sparked national and international outrage.

Bangladesh, a nation of 160 million people where moderate Muslims make up some 90 percent of the population, has seen rising threats and attacks on secular and atheist writers and bloggers in recent years.

Asif Mohiuddin, a self-styled militant atheist blogger, narrowly escaped death after being stabbed by Islamic militants in Dhaka on January 14, 2013.

On February 15 of the same year another atheist blogger, Ahmed Rajeeb Haider, was murdered near his home in Dhaka days after helping organize a rally of young secularists in the capital to demand the death penalty for war criminals of the 1971 liberation war of Bangladesh.

In May 2013, after radical Islamic groups threatened indefinite marches calling for the execution of atheist bloggers, the government intensified a crackdown on the bloggers and online writers over alleged blasphemous posts. 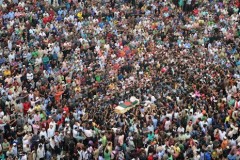 Eight to stand trial over 2013 atheist blogger murder in Bangladesh

Pervez Alam, a prominent blogger, said the evident lack of political will had made Bangladesh a dangerous place for free thinkers and atheist writers.

“I assume Islamists have murdered Washiqur Rahman and they are being encouraged by a culture of impunity. Atheists are a minority in the country and they don’t have power and influence to claim justice from the government,” Alam said on Monday.

“If this continues, more bloggers will be killed at the hands of Islamists, unless there is a political will to save them,” he added.