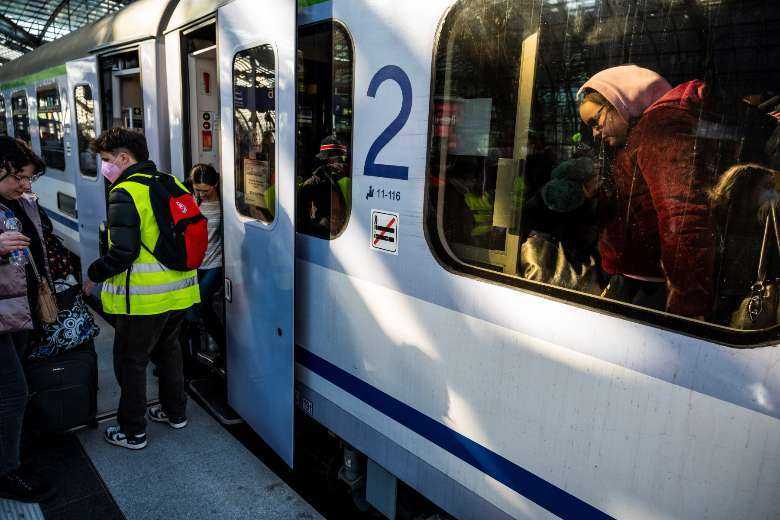 Catholic leaders warn that the exodus of Ukrainian women and children presents a prime opportunity for human trafficking, and they are taking steps to protect the refugees.

Even Pope Francis hinted at the situation in a tweet: "Let us think of these women and children who in time, without work, separated from their husbands, will be sought out by the 'vultures' of society. Please, let us protect them."

In Germany, police have been warning for weeks that aid workers, volunteers and refugees should be vigilant at areas where refugees arrive.

At Munich's main train station, hundreds of Ukrainian refugees mingle daily with aid workers, volunteers and ordinary citizens who receive them. According to several reports, among these "helpers" are an increasing number of men who want to force women into prostitution.

"Here at the main station, a lot is being done — there is a specialized counseling center 24 hours a day," Bettina Spahn, head of the Catholic Railway Station Mission in Munich, told ARD TV.

"We are on site 24 hours a day; Caritas is here 24 hours a day. It is publicly pointed out in multilingual flyers that the women should be careful. The police are on site. It is not a mass phenomenon, but we have already experienced isolated cases of attempted human trafficking and could be of help to prevent it. I am confident that we have this problem under control here, but it does exist. You have to counteract this from the beginning."

"We vet our volunteers as much as possible but, because of the situation, we cannot request police certificates of good conduct, as we normally do when volunteers work with underaged and vulnerable people"

Spahn and her Protestant counterpart are responsible for the ecumenical refugee reception center at the station.

At a mid-March news conference in the Archdiocese of Munich and Freising, Gabriele Stark-Angermeier, a board member of the Catholic charitable agency Caritas, said: "There is definitely an attempt to approach these women with their children." The goal of these men, she said, is to force women into prostitution.

At the Berlin train station, mostly older men have been seen holding up signs with offers of accommodation and overnight stays for women, just like real helpers. The aid workers and police get suspicious when the men show their signs only to certain women and, under certain circumstances, also offer money.

A police spokesman said in the first two weeks of March, police had banned certain men from the station premises, but since no crime was committed, they could not act further.

A March 8 pinned tweet by Germany's federal police — written in German, Russian and Ukrainian — warned women and unaccompanied youths to beware of "suspicious offers of accommodation — contact official agencies only."

"We are aware of the danger being posed by trafficking, and our staff are being kept up to date on the current situation," Thomas Gleissner of Caritas Berlin told Catholic News Service on March 22.

"We vet our volunteers as much as possible but, because of the situation, we cannot request police certificates of good conduct, as we normally do when volunteers work with underaged and vulnerable people. But we do pay a lot of attention and, in our refugee shelter, the staff on site are also aware of the dangers posed by human trafficking."

By March 21, about 10,000 refugees were arriving each day in Berlin, and city officials soon expect that number to double, since the city is only 50 miles from the Polish border.

Caritas is in the process of setting up a center in Berlin where Ukrainian refugees can receive aid and counseling.

On March 15, Valiant Richey, Organization for Security and Cooperation in Europe special representative and coordinator for combating human trafficking, gathered representatives of 17 European countries affected by the humanitarian crisis.

The governments of Austria, France, Germany, Romania and Slovakia reported that some of the measures they have put in place were monitoring online searches after a spike was noted in searches for Ukrainian women for sex and marriage. They also distributed leaflets translated into Ukrainian to inform people on the move of their rights and options.

The warnings seem to reach refugees, who then sometimes distrust innocent parties.

Crazy Tours, a Bavarian bus company, sent buses to the Polish-Ukrainian border to transport refugees to Nuremberg, where housing had been arranged by the city council. But the company reported that many Ukrainian women refused to get into their buses.

"Rumors are circulating those buses are coming and then dumping refugees in the middle of nowhere or putting them into prostitution," owner Marco Eichhorn wrote on Facebook. He said only 56 of the 164 seats were filled on the return trip.

An RTL TV reporter posed as a Ukrainian refugee looking for an apartment on eBay. A man then contacted her that he would like to share a bed with her — and promptly sent explicit photos. He arranged to meet the alleged Ukrainian woman at Berlin's main train station, where the undercover reporter confronted him. He denied all actions.

Contacted by the TV station, eBay said it is currently checking offers with the keywords "neighborhood assistance" and "Ukraine" particularly intensively and, if necessary, blocking users' accounts.