As Indonesia plans to extend the restive region's special autonomy, many Papuans are calling for independence Papuans hold a rally on July 27 to demand a thorough investigation into the killing of two men by Indonesian soldiers in Nduga district. (Photo supplied)

As the special autonomy law for Indonesia’s easternmost region of Papua will expire this year, the debate over the possibility of its extension is heating up.

Formed as a win-win solution amid the demand for independence that continues to strengthen after the 1988 reform following the fall of Suharto, the law was implemented in 2001 to give Papua privileges in the political, economic, social and cultural fields.

However, the move is considered a failure as the two provinces of Papua and West Papua, which have a wealth of mineral resources, are still listed as the poorest in Indonesia and face an even worse humanitarian situation.

Although 95 trillion rupiah (US$6.5 billion) has been disbursed, according to the Central Statistics Agency, the two provinces still rank lowest on the Human Development Index, far below the national average.

Meanwhile, the environment continues to be exploited, which narrows the space for indigenous people.

Human rights violations continue to occur. Rights group Amnesty International recorded more than 69 unlawful killings from January 2010 to February 2018, while the arrests of those who convey political aspirations are still rampant.

This lack of attention to humanitarian issues is not in line with Article 45 of the special autonomy law, which states that the government "must uphold, promote, protect and respect human rights."

As the government plans to extend the autonomy law, which is included in this year’s priority list, various elements in Papua have voiced opposition and intensified calls for independence. 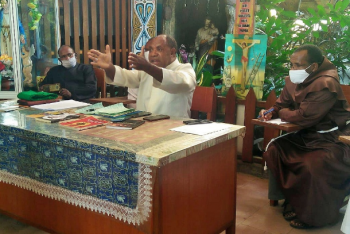 A total of 37 organizations have joined the Papuan People's Petition to reject the law’s extension. They say that "the political conflict between Papua versus Indonesia and all dimensions of the problem are not resolved with the special autonomy and will not be finished by extending it.”

Victor Yeimo, a spokesman for the West Papua National Committee (KNPB), part of the alliance, said the funds poured into Papua through special autonomy were insignificant compared with the money the government obtained from Papua.

He said Freeport had contributed 200 trillion rupiah ($13.7 billion) to the national economy since autonomy was introduced. “That excludes the results of 240 mining companies, 80 logging companies and other natural resource products that have been drained," he said during a recent discussion.

The Catholic Church has also entered the debate. Claiming that Papuans continue to be oppressed, a forum of indigenous priests from five dioceses made a public statement supporting a referendum for independence.

“If asked without any pressure, in general the community including Catholics would refuse to extend the special autonomy,” Father John Djonga, an activist priest who has worked for 30 years in Papua’s remote areas, told UCA News.

“During these 20 years, they have not felt any change. There are too many impacts that make society more difficult, especially human rights violations. They doubt there will be changes in the future."

Pessimism is increasing as there is no alignment with the backward indigenous people, while the urban areas continue to be controlled by migrants, he added.

Meanwhile, Jakarta remains committed to its plan. Tito Karnavian, the home minister and a former police general who has worked in Papua, said he plans to extend the autonomy law for another 20 years.

"[This] is very much needed to accelerate development in Papua," he said during a visit to Timika in Papua on July 23.

In a report published on July 30 titled “Renewing, Revising or Rejecting Special Autonomy in Papua,” the Institute for Policy Analysis of Conflict (IPAC) warned Jakarta that debate over this law is taking place amid higher political tensions than ever as Papua experiences increased violence.

“New ideas are desperately needed,” said IPAC director Sidney Jones. “The problem is that in the past every time Papuans have presented concrete proposals to address the issues that matter most to them — migration, security and justice, for starters — they have been undercut or overruled.”

Cahyo Pamungkas from the Indonesian Research Institute said that no matter how good the special autonomy law was, there would be no legitimacy if there was no dialogue with pro-independence groups.