At least 81 dead in attack on Peshawar church 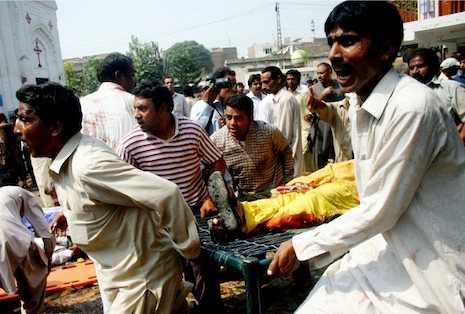 Christians carry a body from the church. The dead include at least seven children (picture: AFP/STR)

At least 81 people were killed by two suicide bombers outside a historic church in Peshawar on Sunday, prompting countrywide protests by Christians who condemned authorities for failing to protect minorities.

The death toll was expected to rise as many of the 150 people injured from the blasts at All Saints Church were still in critical condition following one of the worst terrorist attacks in recent history in Pakistan.

A policeman who tried to grab one of the bombers was among the dead, he added, along with seven children.

SAMAA TV quoted police sources as saying that one of the suicide bombers was a woman in her early twenties. Police said that samples of her body parts were sent to a laboratory in Lahore for DNA tests.

Jundallah, a group linked to the Pakistani Taliban, claimed responsibility for the attack saying it was in response to US drone strikes, the latest of which reportedly killed seven people in the tribal area of North Waziristan on Sunday.

“Until and unless the drone strikes are stopped, we will continue to strike wherever we find an opportunity against non-Muslims,” said Jundallah spokesman Ahmed Marwat.

“Terrorists have no religion and targeting innocent people is against the teachings of Islam and all religions,” he said.

Enraged Christians took to the streets in cities across the country to protest the attack, with many condemning both the government and the militants.

“[The government] has failed to provide security to minorities in the province,” he said.

In Lahore, protesters today called for the removal of Khyber Pakhtunkhwa Chief Minister Pervez Khattak for his failure to provide security at Churches despite Taliban threats.

“Khattak is an incompetent chief minister and should be dismissed from the top provincial position,” Human Liberation Commission of Pakistan chief Aslam Sahotra told ucanews.com.

The Khyber Pakhtunkhwa government has announced compensation of 500,000 rupees (US$4,750) for the victim’s families and three days of mourning in the state.

Lahore Bishop Irfan Jamil said all missionary schools would remain closed across the country during the period.

“We call on the government to ensure the perpetrators of this inhuman attack are brought to book,” he said. “The Church of Pakistan also appeals to the Christian community to show restraint while holding protests against this terrorist attack.”

Paul Jacon Bhatti, head of the All Pakistan Minority Alliance, an umbrella group representing religious minorities, called on Pakistanis to unite in the wake of the blasts.

“It is an act of terrorism which has been carried out on a weakened Pakistan. But I appeal to my Christian and Muslim brothers to maintain calm and thwart the militants’ bid to instigate sectarian riots,” he said. 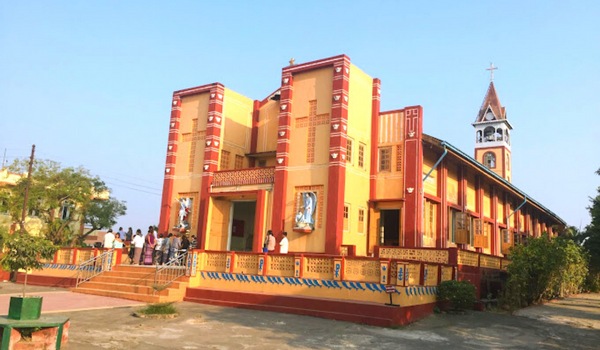