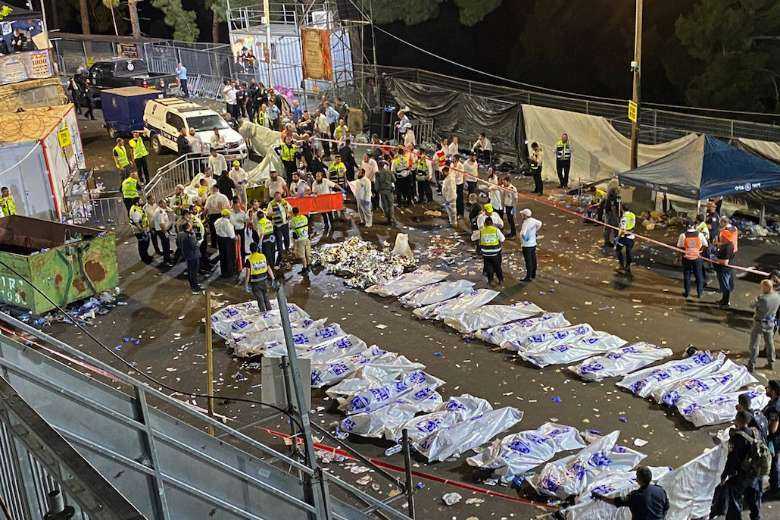 Security officials and rescuers gathering around the bodies of victims who died in a stampede during a religious gathering in Meron in northern Israel on April 30. (Photo: AFP/United Hatzalah)

At least 44 people have died in a stampede at a religious festival in Israel.

Dozens more were injured at the Lag B'Omer festival at the foot of Mount Meron in Galilee in the north of the country on April 30.

Prime Minister Benjamin Netanyahu described it as a "heavy disaster" and said he was praying for the casualties.

Witnesses said people were crushed to death in a packed passageway, some going unnoticed until the PA system sounded an appeal to disperse as crowds thronged the Mount Meron slope in defiance of Covid-19 warnings.

The pilgrimage was the largest public gathering in Israel since the Covid-19 pandemic began, with reports that there were three times more people there than allowed.

Early reports suggested a structure collapsed but officials later said the deaths were the result of a stampede. Police sources said the stampede started after some people slipped on steps, causing dozens more to fall.

"It happened in a split second. People just fell, trampling each other. It was a disaster," a witness said.

One pilgrim reportedly thought there was a bomb alert when loudspeaker messages were heard urging the crowds to disperse.

"No one imagined that this could happen here," the man told Channel 12 TV. "Rejoicing became mourning, a great light became a deep darkness."

Earlier in the day, officials said they were not able to enforce coronavirus restrictions at the site due to the huge crowds.

Tens of thousands of Orthodox Jews make a pilgrimage to Meron each year for Lag B'Omer.

According to the Times of Israel, organizers estimated that 100,000 people arrived on April 29 evening, with more due to arrive on April 30.

Last year's festival was restricted but Israel's successful vaccination rollout has allowed it to lift many restrictions in recent months.